Gone are the days when a manufacturer’s worth in India used to be appreciated by their advertising budget. Indian two-wheeler makers have started pouring in big bucks to grab a share of the market. This has been made possible only because of the influx of international players who are pushing the competition several notches higher.

On similar lines a very interesting article on Economic Times caught my attention. It reveals the R&D budget Indian two wheeler manufacturers have invested. Let us have a quick look at these numbers..

You got to believe this! Hero is (compelled to) spend massive amounts in R&D and look at that figure of 2016. It is three times more than Bajaj and four times higher than TVS!

With 1,035.86 crores kept aside for the R&D team this year, Hero MotoCorp is the largest spender in terms of two wheeler business. Their aim to decrease dependency on their erstwhile partner Honda’s technologies requires this. While for others, there has been a gradual increase, Hero’s have increased 10 times in the last 3-4 years.

Back in 2013, Hero was one of the least spending brand on R&D with just 86.21 crores heading to the department as it was Honda who did all the R&D (Do you know: Honda had put restrictions on Hero from carrying out too much of R&D during their partnership?). We got to see some of the fruits of Hero’s massive investments at the last two Auto Expos when they showcased some spell-binding products. However, not much of that has made it to the showrooms yet (related report). It would be interesting if they can really turnaround things and force-change the generic notion that they are 100cc specialists only! 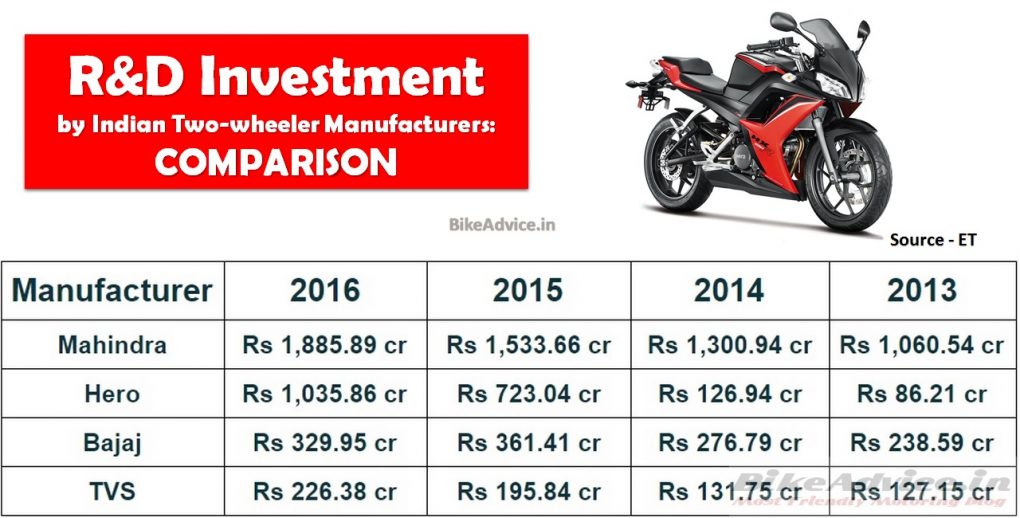 With the masterstroke of having a European manufacturer as its partner, the Chakan based giant is one of the most profitable bike makers in the country. The iconic Pulsar range and the newly developed V15 have been star sellers for the company and they have successfully resurrected the Avengers as well.

With an aim to go bigger in terms of engine displacement, the bike maker is all set to launch the revolutionary Dominar 400 on 15th of this month and they have been pretty consistent with their investments.

33 years of racing heritage, one of the first manufacturers in the country to be at the Dakar and with the new collaboration with the Germans, TVS has slowly emerged as the golden boy in the Indian two-wheeler industry.

With products like the Akula (and others) in the pipeline, TVS this year has set 226.38 crores for R&D.

Mahindra’s numbers, it appears include the overall business (including 4-wheelers). With their two-wheeler portfolio not doing very well, they have changed their strides and will now focus on premium products. The recent acquisition of Classic Legends (BSA) and the rights to sell Jawa brand appear to be game-changers.