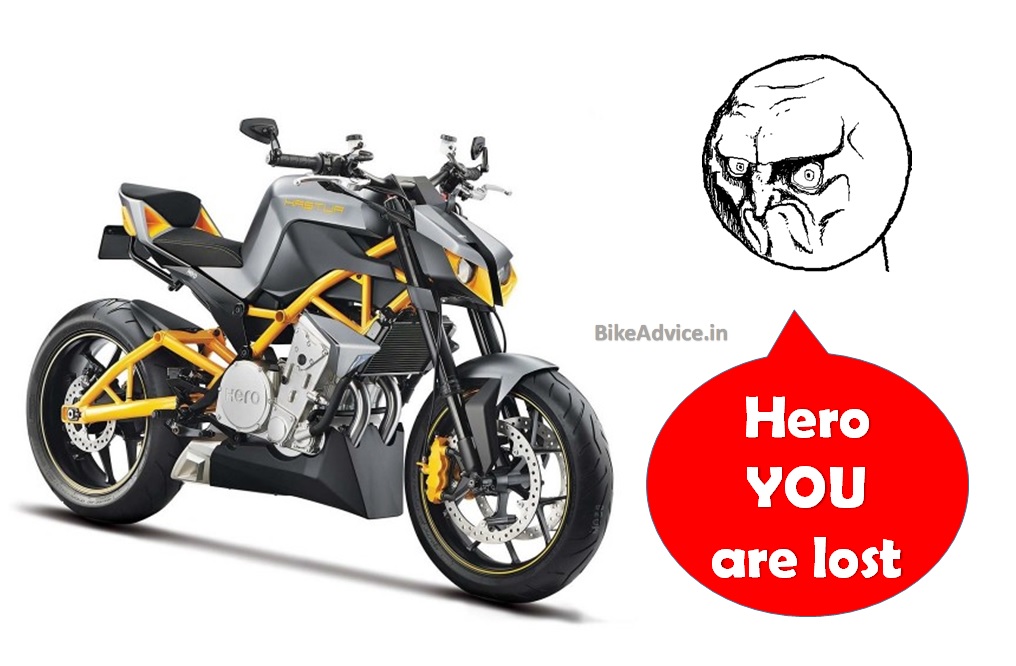 Let me admit before even beginning with the article that I know many readers might not agree with the premise of this article. I know you don’t think that Hero is in a dangerous state of fading away into oblivion. But let me prove it to you that my concerns about the future of the world’s largest two-wheeler manufacturer are genuine. To begin doing that, I’m going to ask you one simple question.

Which motorcycle do you want to upgrade to next?

Forget about upgrading, if you were to buy a new motorcycle, would you visit a Hero showroom at all? Won’t you think about the usual KTM, TVS, Bajaj, Kawasaki, Yamaha, Suzuki, Royal Enfield or even a Honda? Though some people would love to say that they would buy a Karizma, but frankly, how many of us actually would? (According to December 2017 sales, Hero dispatched only one Karizma)! Related reading: Now Hayabusa Outsells Karizma; Believe it or Not!

The reasons for the dismal state can be found in the success story of Hero itself. It has been the world’s largest two-wheeler manufacturer for almost 15 years running. Hero has earned this distinction by selling a large number of Splendors and Passions over the years. These motorcycles, which were a necessity of the past when “kitna deti hai” mattered the most, do not excite Indian consumers anymore.

Shubhabrata Marmar of Overdrive had noted in one of his articles,

“I’m not sure why, but Indians as people are short-sighted in terms of time.”

Another argument can be made by looking at the winners of the annual motoring awards. I am not among the ones to give importance to these awards but if you look carefully there is a story that all these awards tell. Ever since its inception only one commuter motorcycle, Honda Twister (which also had a sporty side to it) has won the IMOTY and no other Hero motorcycle has been able to win.


What do we infer from these observations? First the preferences of the Indian consumer have changed as they have started to think of motorcycles as something beyond just transportation. Fuel efficiency and price are not the sole criteria. Performance, handling, comfort, appeal etc. are given equal importance. Secondly, Hero is lagging behind in the race when it comes to its products. One might argue that the journalists do not represent the entire community but they certainly are better placed to assess and form an idea of where the industry is headed as a whole. Another point that can be put forward is that one award does not reflect the state of entire market. But this is not just about this one award. Almost all topmost Indian automotive awards have the same story to tell.

Hero has been slow to acknowledge that the buying preferences have changed over the years and is probably happy selling these unimaginative and uninspiring products. Especially in times where the decision maker in the Indian household has changed. The decision-making responsibility in most cases lies with the young teenager in the house who advises his or her father. These teenagers are well informed, thanks to the internet and automotive websites/blogs. What doesn’t help is the fact that neither do Hero motorcycles have the visual appeal nor are they best in their respective segments.

For once, right after the divorce from Honda, it did appear that Hero would get out of its conservative shell and prove to be the world’s no 1 that it actually was. The masterstroke in choosing three products from Honda’s stable to base Mastero, Ignitor and Impulse on, was absolute genius. And in 2014, the products it displayed at the auto expo had the capabilities to give sleepless nights to the entire competition, if not bury them. But everything started to go downhill from there. EBR filed for bankruptcy and Hero allowed it to go bankrupt. It was one of the saddest decision made by them, and maybe one they’d regret the most.

EBR, after so many years of effort and hard work, had painstakingly developed credibility and was a potential alternative to the Italian and Japanese manufacturers in the USA. Though some might argue that losses made by EBR would have been one of the reasons behind Hero cutting off the strings. Maybe Hero did not see any synergies or long term benefits. But if that’s the reason then nobody could have been more naive, in my humble opinion.

Ducati, MV and Harley all make small motorcycles. BMW and KTM have also started making small capacity motorcycles to bring new customers into their fold. How could then EBR make just handful of motorcycles and be profitable? Hero could have shown more patience. It also wasn’t the right time to exit since the EBR racing team had started to gain momentum and was showing promising results. EBR could have been a bankable technological partner to Hero, similar to what KTM is to Bajaj right now. It could have worked wonders, you know!

Even now if Hero realises the error of its ways, its success and acceptance as a premium motorcycle manufacturer, and a youth brand, is not just in their hands. Hero has definitely lost the early-mover advantage, an opportunity it had with HX250R, an almost ready concept that has yet not seen the light of the day in three years despite several assurances. Related reading – Hero Shocked Everyone at 2014 Auto Expo But NOT Much Has Made it to the Roads in 3 Years!

There is no gap in the Rs 1 to 2 lakh bracket with products such as RS200, Dominor 400, Yamaha R15, the new FZ250, TVS RTR 2004V (and an upcoming Akula 310), Honda CBR 250R and CBR 150, the entire RE brochure, the KTM Duke and RC twins, Mahindra Mojo and Benelli TNT25, all vying for attention. The competition is so tough and proven that any new entrant will have a tough time in just establishing a foothold. This is when a backing of the EBR name could have helped, kind of similar to what the name of Honda had done for Hero Honda ages ago.

It is definitely not a good position to be in but all is certainly not lost. Hero just has to get people excited again. But Splendor and Passion will not generate that excitement, even after adding i3S and calling them an all-new products. These are the bread and butter for Hero and they should definitely keep on selling these. These will help in maintaining their numero uno position. But they will have to realise that the competition is not only with Honda, it is with everyone else too.

And to compete with everyone else we would need a brand that can create automatic buzz in the market. If we look at the current portfolio there are only two names that are capable of generating that buzz- Karizma and CBZ (not Xtreme). It is very imperative that Hero revives these brands. Karizma has a huge fan following and people are praying for its resurrection. Sadly, it has deviated from its roots and people haven’t taken a liking to the new changes. In this instance going back to the roots doesn’t seem to be such a bad idea. It was a comfortable, pleasing and refined everyday sports cruiser which it should be. Related reading: Karizma Brand Won’t Die; New Model Under Works

Also the failure of Bajaj AS200 couldn’t come at a better time. Now Karizma has a good prospect with only an ageing but highly successful Pulsar 220 to compete with. But CBZ has a relatively stronger competition. It has to be better than the FZ and the Gixxer for it to have any chance at being successful. It is good that Hero has developed a marvellous technological center in Jaipur. It is time to put it in use.

Other names that can grab attention are the Hero Impulse and Ignitor. Though being in a competition of one, and a very capable and praised product, Impulse has failed to generate enough numbers. It has been totally neglected and the manufacturer hasn’t given it a substantial update in 5 years. Also how could they miss a perfect marketing opportunity when Adam Riemann took the Impulse on a 4500-km journey through the Himalayas. It had the ability to open a very substantial segment for Hero.

Regardless of the things done in the past Impulse deserves another shot at the market with a well-crafted strategy and a well-engineered product (a bigger engine, please?). Also, now that the focus of most manufacturers is on the 100cc and 150cc segments, and the 125cc is being ignored, it is the perfect time to give Ignitor another push. Let it compete with Bajaj V15 and other entry level 150cc.

Hero also needs to develop an aspirational value to its brand rather than just selling motorcycles on the need factor. P+urchases based on need are often put on hold but those based on aspirational value are seldom. Case in point, demonetisation. While the industry registered a de-growth of 5% in the month of November 2016, sales of RE were up by 38%. Related reading: Demonetisation Wiped Off ~3 Lakh Units from Top Manufacturers in Dec 2016: Its Massive!


Aspiration comes from fun, and fun never accommodates compromises, which motorcycles with all-round abilities do have. HX250R and Hastur are the only realistic possibilities of bringing fun and energy back. These motorcycles should not have trade-offs for the customer which creep in when you try to satisfy all but are able to please none. Make them hardcore and unapologetic. This will get you loyal and true following which will make sure that the next time Mr Modi comes on the 8 PM news and says “Mitron, aaj madhyaraatri se…” there is no cause for concern.

In the end, I’d like to remind everybody that “capture the mind and the heart and you will capture the market”.  The door has not shut on Hero but it will require a solid push to throw it open, and they have all the means to be able to do it. But please don’t be late again because the saying ‘better late than never’ doesn’t apply here.

And now can we have the HX250R already?

Article by Sourabh Pareek from IIM Kashipur. You can also share such insights or anything which you feel is exciting with our readers. Just drop an email at saad[@]bikeadvice.in and you may win our BikeAdvice Tee! Now, cast your opinion in the following poll…