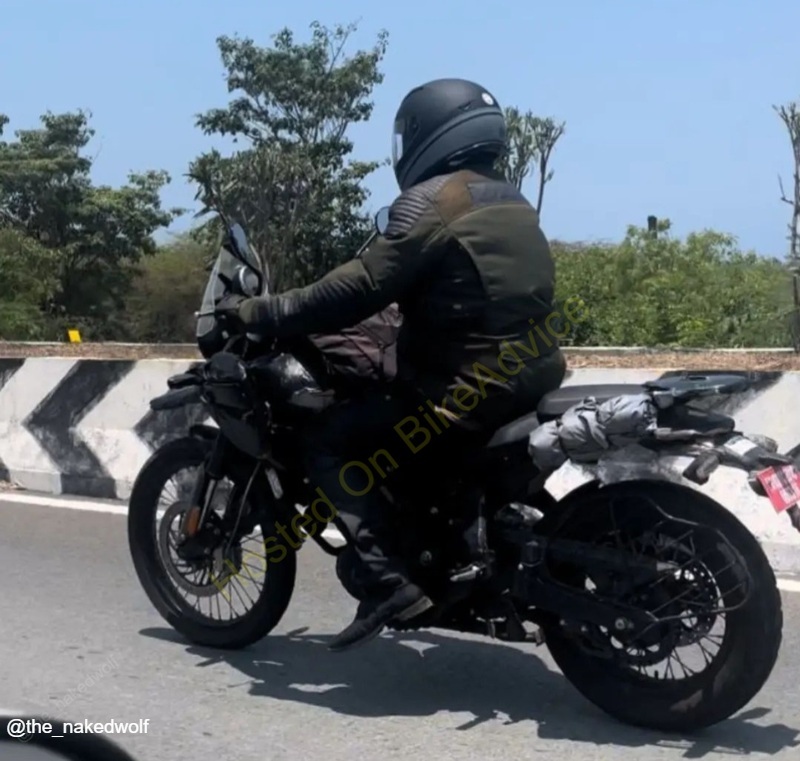 New Himalayan 450 details and spy pics have emerged that reveal the bike in total (but camouflaged state). It is a big departure from current Himalayan…

So, it appears that Royal Enfield have amped up the development and testing of their upcoming Himalayan 450 ADV. A few weeks back we shared the first glimpse of the Himalayan 450 on test, followed it up with some new and interesting details/rumours that hint at the possibility of the new ADV putting out very competitive 40 HP and 45 Nm!!

Now, thanks to Akshai, we have the first full look of the upcoming Himalayan ADV.

The Himalayan 450 test-bike was captured cruising at a high speed on the highway. This is the first instance where we can see the ADV in its full glory.

The first look of the Himalayan 450 is that of a proper modern ADV. The stand out details of the 450, at the first glance, is the use of big 21” spoked-wheel at the front, the length of the bike and the tall stature.

The overall design appears to be inspired by the modern rally-derived ADVs – a departure from the current Himalayan. It features a compact & tucked-in engine bay which allows for better off-road capabilities. This coupled with a bigger 21”-17” tyre profile provides a taller stance which will give the rider the confidence to push the bike deeper into the wilderness without worry.

Also read: Spotted! Royal Enfield Testing A 650 Cruiser Outside India; Can You Guess Which Is It???

Looking closer, we can see the handlebars are mounted higher, which will aid the rider better control the ADV either sitting or standing on the footpegs. Talking about the footpegs, they are centrally mounted, right below where the rider sits, which will allow easier transition from sitting to standing back to sitting during off-road excursions. The seat is split-arrangement and the seat height will be a lot taller, matching the character of the ADV.

Other features we can note on the ADV are the use of single-disc at both ends, double-sided swingarm at the rear combined with chain guard and a saree-guard which could suggest that we are not very far off from the launch.

We can’t see much of the front in the images, but we do see a beak-fender mounted high up at the front coupled with a small tyre-hugging one. The windscreen is a tall unit with a slight curve which covers the vertically mounted instrumentation.

The instrumentation is expected to be a digital unit but will not feature TFT technology to keep the costs down. The suspension at the front consists of Upside-Down (USD) forks which will make it a capable bike both on & off-road. The ADV appears to be fitted with a large mounting rack at the rear which we expect will come standard on the bike.

As of now, the biggest mystery is the engine. Whispers say that Royal Enfield have developed a new engine for the upcoming Himalayan 450. The new engine will be a liquid-cooled unit which will put out near about 40 HP and 45 Nm of torque. Another big transition that is expected is the inclusion of a 6-speed transmission system – a step up from the current 5-speeder.

Looking at the state of the captured test-bike, we are fairly confident that this bike will meet its expected launch timeline of early 2023. It is said that the Himalayan 450 will charge a premium and can be priced around Rs. 2.7-2.8 Lakh (ex-showroom).

It is too early to say anything definitive, but looking at the Himalayan 450 we are actually excited to see how the ADV segment of our country will evolve in the coming years. Yezdi have brought their own version of Adventure  along with Suzuki launching their V-Strom 250 SX in the ADV market – giving the prospective ADV customers some more options to choose from.

The KTM 390 Adventure is right now the King of the entry-mid-size segment with highest power and maximum number of features. But, it looks like Royal Enfield is after this crown…