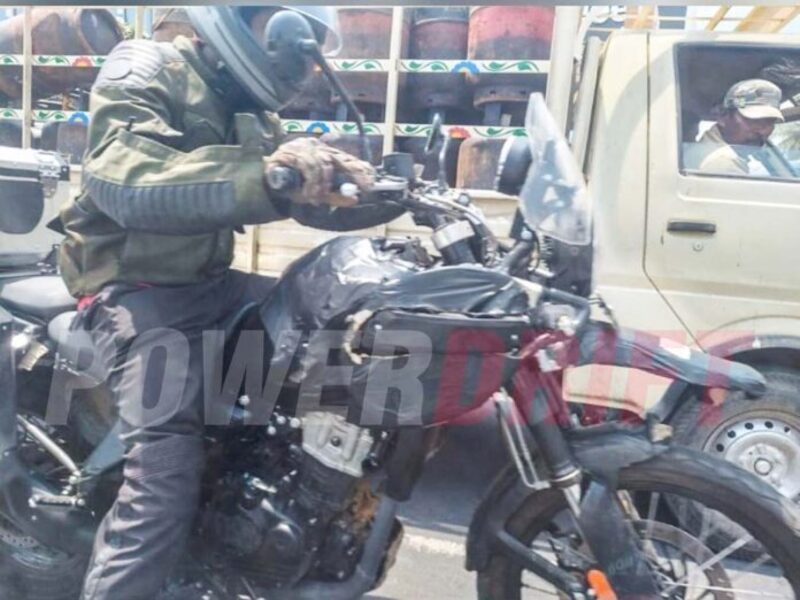 Royal Enfield Himalayan 450 ADV is almost confirmed by a spy-image that has surfaced. This is a big surprise from the Chennai based maker..

What a way to begin the week. What started as a rumour from a render going around, has finally been confirmed that Royal Enfield is indeed working on a completely different ADV that could be the speculated Himalayan 450. And from the images, it can be understood that the development of the ADV is way further than we could have imagined.

Allegedly codenamed ‘K1’, the new Himalayan hints that RE have decided to adopt a modern design language for their upcoming ADV bike. While the current Himalayan 411 showcases old-school ADV look, the new bike exudes a modern and premium persona.

The design appears to be inspired from modern off-roading machines, but it also retains some classic Himalayan design and visual elements. The single round headlight, the round rear-view mirrors, the wide windscreen mounted right on top of the headlight, all reminds us of the current Himalayan 411 ADV.

The biggest difference that jumps out is the use of Upside Down (USD) shocks at the front. This gives us a hint that Royal Enfield are going the whole-hog with this one. The appearance of the top-box at the rear along with street-biased tyres on this test-bike hints that the kit is being tested for road usage at the time of capture.

The other details we can see from these images is how tall the bike appears to be combined with a high-set fuel tank. The taller fuel tank along with higher-set handlebars could allow better rideability while standing during the off-road ventures. We can safely assume that this bike, like the current Himalayan, will be using a 21” front and 17” rear tyre combination as well.

Not much is known about the upcoming Himalayan 450. If whispers are to be believed, the new ADV will be using a Trellis frame, that will be lighter than the current Himalayan 411. It is claimed to be powered by an all new 450 cc, liquid-cooled single-cylinder motor that will be putting out power figures right around 40 HP. The engine, just like conventional ADVs, will be tuned to offer better grunt in the  low-to-mid rev-range.

The appearance of the test-bike and the confirmation that the development of the Himalayan 450 is so far along, makes for a very exciting and interesting turn of events. This strongly indicates that the ADV segment of India is going to get very competitive very soon.