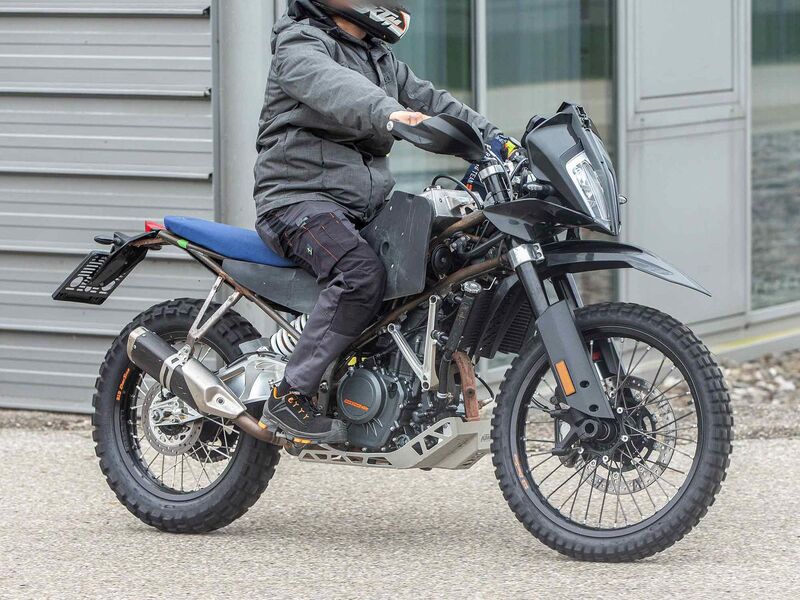 These could be 390 Adventure Enduro spy pics that have surfaced for the first time. 21 inch front, spoke wheels, etc – we are loving it…

Adding another test-bike sighting to our books is this enduro mule from KTM that has been snapped heading out to follow its predetermined program of long testing on the roads.

This model has a very clear resemblance with the 390 Adventure that KTM already sells in various parts of the world. On the same lines, this test-bike is carrying the same headlight and the frame (which was spotted a few months ago on the test-unit of the alleged 390 Duke). So, is it the evolved version of the 390 Adventure – the 390 Adventure R?? Or is KTM working on an Enduro machine based on the 390 platform??

Looking a little closer, we see a very crude, unpolished and rusting tubular trellis frame with a nearly rectangular alloy fuel tank thrown over it. Aside this is the 390 power-unit fixed within this frame with an alloy bash-plate underneath it and a beak fender at the front (which appears to be borrowed from their enduro models). All signs point at the possibility of this being an early prototype, put together to understand various aspects and dynamics of the machine.

There are certain elements we can make a note of though. The frame on this prototype machine is very similar to the new frame which has been spotted earlier on the 390 Duke prototype. The new design is a more conventional and standard trellis design very similar to the design Ducati have used and made mainstream for decades.

Next is the difference in swingarm that is being used on this proto-bike. Compared to the near-production cast alloy swingarm with a fan-shaped design of the next-gen 390 Duke, this prototype appears to have a machined billet-aluminium unit with a curved profiling adding more ground clearance and suspension travel to the rear.

Other quick features that we can notice on this test mule are – the use of KTM staple colored TFT screen, USD forks at the front combined with monoshock setup at the rear, single-disc braking setup at the front and rear, 21”-18” wire-spoke wheels combination (finally!) covered with knobby profile tyres, single flat seat and a small tail section very telling of an off-road bike.

But, what does it all mean??

There are two scenarios we can extrapolate from this sighting. First, it seems KTM is taking the success of ADVs in today’s time very seriously. They might be working on a more aggressive version of the 390 Adventure, taking inspiration from their very successful 890 Adventure R and 790 Adventure machines.

Or Secondly, KTM is developing an Enduro version of the 390 Adventure inspired from their 690 Enduro R. So this model will be an off-road bike with minimal electronics and could be suitable for both on and off-road conditions.

Whichever of the two scenarios is true (we hope for the first one to be), looking at this model we can see that the bike is in its very early stages of development. So we can’t expect this machine to hit our roads anytime soon.

It is expected that the next-gen 390 to make its appearance will be the Duke variant which is expected in early 2023. The latest iteration 2022 RC 390 is about to launch in our country with the 2022 390 Adventure already hitting the dealerships indicating that the launch is just around the corner.