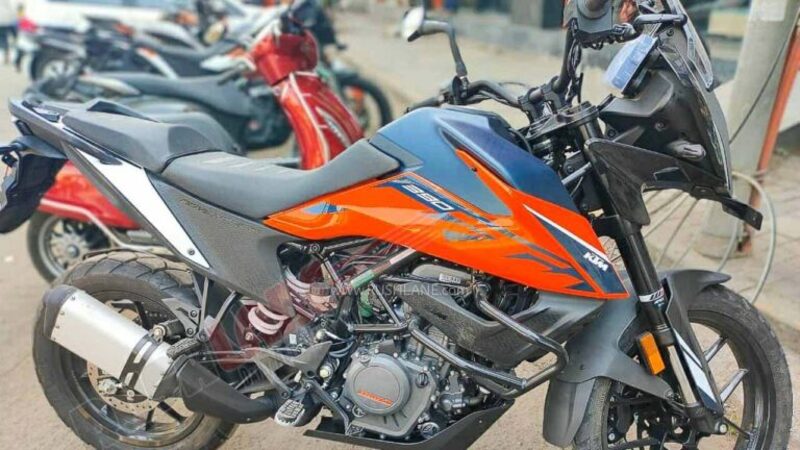 2022 390 Adventure launch can be expected anytime soon as KTM has started dispatches to local dealerships. It comes with many changes over the current model…

With the 2022 390 Adventure launching in the US last month, it was expected that the highly popular ADV from KTM will also come to our country very soon.

And in a latest update, it has been confirmed that the launch of the updated 390 Adventure is very near with the first batch of units reaching dealerships.

An online portal has shared images from one such dealership in Mumbai, where the updated model has been snapped. The colour featured in the images is the newly introduced MotoGP Factory shade – Atlantic Blue – which will also be seen on the 2022 RC 390 and is also featured on the 2022 890 Duke R recently unveiled in the international market.

The 2022 version of the 390 Adventure is a much-anticipated update of the machine. It will feature an improved and updated traction control.

The 2022 390 Adventure will feature two riding modes – Road and Off-Road. The off-road mode has been improved and the issue, where when the bike would fall-over, the mode would reset, has been dealt with and will not happen in the updated model. The riding modes will use the traction control of the ADV to control the rear-wheel spin according to the riding and surface conditions.

The other changes brought to the new model are visual in nature. The new 390 ADV will come in two new colours – Orange with Blue accents and Black with Orange accents. The other change is the alloys have been changed from the previous 12-spokes configuration to the new 10-spoke configuration. KTM claims that this change has been brought to increase the stiffness and resistance for the rims.

Other than these changes, nothing new will be seen on the new ADV. It will be powered by the same 373 cc, single-cylinder, liquid-cooled, motor that puts out 43 BHP and 37 Nm of torque mated to a six-speed gearbox. The ADV will also feature a bi-directional quick-shifter as standard.

Feature-wise it will be loaded to the brim with WP Apex suspension, disc brakes with switchable ABS, TFT screen with Bluetooth connectivity, ride-by-wire throttle, USB charging port and so much more.

Unfortunately, there is no news as to whether the 2022 390 Adventure will get adjustable suspension in India or not.