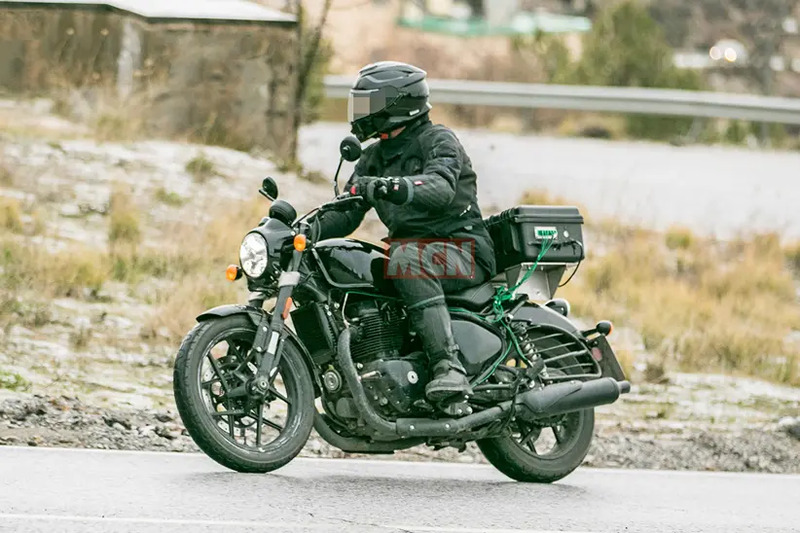 So, it has become somewhat of a trend to start off the week off with the spy-images of Royal Enfield test-mules.

Past few weeks and months, we have been consistently seeing the upcoming Hunter 350, Bullet 350, Super Meteor 650 and Shotgun 650 being tested either on our roads or on roads outside India.

In the latest set of spy-images, shared by MotorCycle News, we see a very familiar looking cruiser-cum-roadster bike carrying styling cues and features of Royal Enfield being tested on foreign soil.

Looking closely at the cruiser being put to test, we guess it is the Shotgun 650 which has been spotted on our roads at various occasions. The biggest give away to its identity is the single-seater bobber design of the bike which the SG650 concept first showcased at the EICMA 2021.

The Shotgun 650 looks very near to being production-ready and appears to be undergoing final stages of road-testing. The appearance of the saree-guard combined with the bike looking nearly finished tells us that it is not too far that we get to see the bike on our nearest showroom floor.

The Shotgun continues to carry the Royal Enfield’s design language. The bike continues to be equipped with a single round headlight at the front, tear-drop shaped fuel tank, single & wide seat, broad front & rear fenders, round turn-indicators & tail-light and twin body-length exhaust pipes.

The headlight unit looks new and appears to be a horizontally-split LED unit. Behind the headlight unit it is equipped with the staple round instrumentation paired with a small Tripper navigation pod.

Looking at the chassis, the bike appears to be riding on 19” front ahd 16” rear wheels. The rider posture looks to be comfortably upright thanks to centrally-mounted footpegs, moderately low seat-height and high-set handlebars. The front is fitted with USD forks which will add to better handling characteristics to the cruiser.

What we can say with confidence is that the upcoming Shotgun 650 will be sharing the power-unit with the current 650 twins. The 648 cc, parallel-twin engine will be producing 47 HP and 52 Nm of torque but will probably be tuned differently to better match the character of the bike.

The company has shared and/or confirmed no details regarding the launch timeline of the upcoming Shotgun 650. However, looking at the advanced state of development and testing of the bike, we will not be surprised if RE do bring the bike by the end of this year (2022).