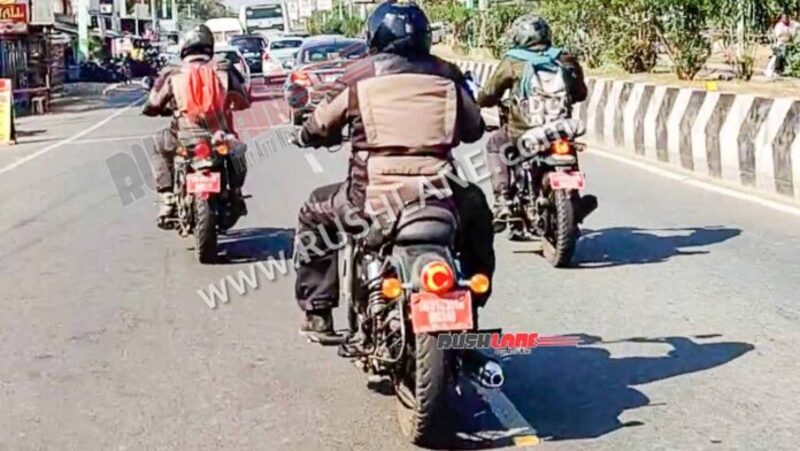 And the testing continues…

It appears there are no rest-days for Royal Enfield. In the past few weeks and months, we have been regularly spotting various Royal Enfield test-bikes from two different platforms being tested on Indian as well as International roads.

Recently, RE has started using a new method of testing their test-mules. On two different occasions, we have seen the company testing their upcoming bikes in pairs.

First, it was the hefty Super Meteor 650 testing alongside the upcoming Hunter 350 sibling. Second was the pair of Hunter 350s being tested together in a slightly different trim.

Further evolving their novel testing method, this time the next-gen Bullet 350 test-bike has been spotted alongside a pair of Hunter 350s.

Royal Enfield still continues the classic roadster design of the Bullet but added some new elements to the bike.

From the images we can see that the new bike is fitted with new headlight and tail-light units which appears to be very similar to the new-gen Classic 350.

The headlight is encased in chrome on the test-bike along with the round rear-view mirrors also receiving chrome treatment as well.

The engine powering the new Bullet 350 will be the new J-series unit which is currently being utilised on the Meteor 350 and the Classic reborn. The engine will put out 20.2 HP and 27 Nm of torque and will be connected to a 5-speed gearbox.

This engine will also be shared by the upcoming Hunter 350 roadsters, which are being tested alongside the Bullet 350.

It will be a very busy year for RE with so many models still to come out. After the recently launched Himalayan Scram 411, it is expected that the Super Meteor 650 cruiser will be the next one to be launched followed by the Hunter 350 roadster later in the year.