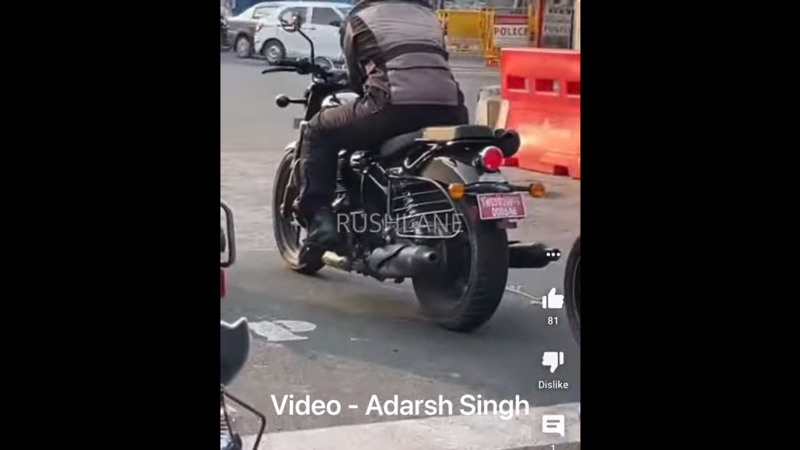 Looks like we are winding up the weekend with another appearance of Royal Enfield test-bikes wrapping up their testing sessions on our roads.

Just yesterday, we shared the spy-images and exhaust sound of the upcoming Hunter 350 pulling away from a stop-light. And today the Hunter is spotted alongside its upcoming bigger sibling – Super Meteor 650.

Comparing the cousins, we can actually make out the sheer size and heft of the upcoming Super Meteor. The upcoming 650 bears all the characteristics of a traditional cruiser like long wheelbase, round headlight, tail-light and indicators, round rear-view mirrors, broad fenders covering wide tyres etc.

There is nothing new we can spot on the Super Meteor. The only thing we can see different is the position of the foot-pegs have been brought towards the centre, instead of the forward position seen on the Meteor 350. The seating is upright thanks to adequate seat height and high mounted handlebars.

Just like Hunter 350, the Super Meteor is fitted with a saree guard which means the model is nearly production ready and is undergoing final assessments before the launch. We can clearly see that the instrumentation is a dual-pod arrangement with the bigger one showing relevant information like speed, fuel levels etc and the smaller one being the Royal Enfield’s own Tripper Navigation system.

Just to refresh the memory, the Super Meteor will be powered by the tried and tested 648 cc parallel-twin engine that puts out 47 BHP @ 7,150 RPM and 52 Nm of torque at 5,250 RPM mated to a 6-speed constant mesh gearbox. There is a possibility that the engine will be tuned for a better cruising capability and might be assisted by a slipper clutch.