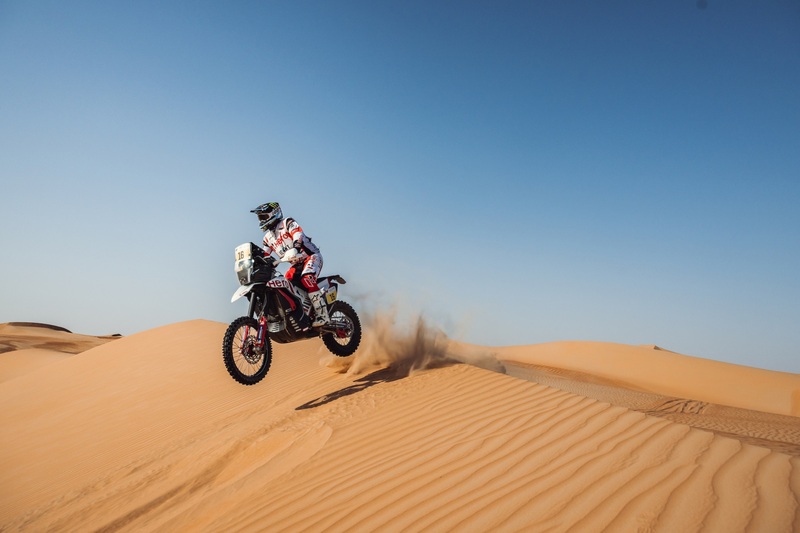 All the three riders contested bravely through the challenging 5 days, battling and overcoming their own injuries as well, and completed the event with two riders securing Top-10 finishes with the third rider just off by a few positions.

JRod, following his strong performance from the previous Dakar Rally excursion, performed consistently throughout the 5 days of the rally event securing top-10 at every stage. In the final stage, he finished with the 8th fastest time and earned 6th position in the Rally GP class overall standings.

The other two riders – Franco Caimi and Ross Branch – had their own battles to win along with the rally challenge. Franco Caimi was recovering from his injuries he sustained last November. But this didn’t deter him from finishing the last stage at 10th position and securing 8th position in the overall ranking of the Rally GP class by the end.

While the new rider addition, Ross Branch, suffered a severe crash which prevented him from finishing the 1st stage of the rally. However, despite this setback he soldiered on to finish the last stage in 14th position, earning an impressive 13th overall rank in the Rally GP class by the end of the event.

“As is the usual case with Abu Dhabi, it was a tough week for us. ADDC is the hardest race in 100% sand conditions and is always a proving ground for man and machine. Continuing our good track record from the Dakar, we’ve finished the race without any technical issues, and all three riders are back with us safe – and I couldn’t be happier”.

“In the last edition of ADDC, JRod won a third place with a 34-minute gap from the winner. In this edition, he has missed podium by just 6 minutes, and his gap from the winner is just 10 minutes after six days of racing! It just goes on to say how competitive Rally GP has become, but I’m also proud that with each race, our performance is improving by several notches. “It was great to have Ross join us in this race, and prove his great potential. Unfortunately, due to his crash on day 1, he could not make it to the top overall ranks; however, his stage win on the day after his crash was a truly inspiring moment for all of us. JRod, as consistent has ever, has showcased a great performance across the stages and proven his reliability yet again. Franco’s amazing comeback from his injury last year, is also highly encouraging for the team”.

“We will continue with our commitment to train and improve ourselves, and accomplish what we’ve set out to achieve. Sebastian Buhler has been recovering from his crash last year, and I hope to see him back with us soon. I extend my thanks and regards to the Hero family, partners and fans across the world for their continuous support and motivation.”

Thus concludes the Hero MotoSport Team Rally’s second event of FIA-FIM World Rally-Raid Championship 2022. The rally team will now focus on training and preparing for the next remaining stages of the championship. The Hero Team Rally will compete next in the Andalucia Rally, Rally Kazakhstan and Rallye Du Maroc in the upcoming months.

Our congratulations to the Hero MotoCorp Rally Team and the three riders on such consistent and stellar performance. We send our best of luck for the next three rally challenges and root for them to have even better results.