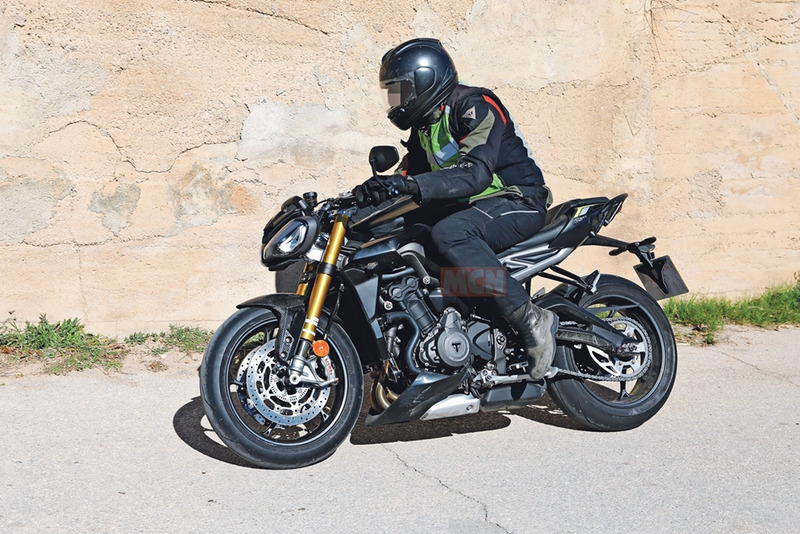 These 2022 Street Triple spy pics wearing golden colored Ohlins suspension and other changes, suggest that an update is under works..

In the middleweight naked segment, the KTM 890 Duke R and Triumph Street Triple RS are the undisputed champs always at each other’s heels. These mid-sizers are already packed with high performance and best tech, but their makers are constantly updating them to ensure the interest remains.

Not to fall behind in the development race, Triumph is readying its updated Street Triple RS for the wolrd. Motorcycle News have shared images of an prototype testing on international roads with a big suspension overhaul.

Till now, the Street Triple RS rode on Showa shock-ups. However, the new test-bike has been spotted using a beefy set of Ohlins gold coloured shocks at the front. Looking a little closer, we can see Triumph is using the stock triple-clamp suggesting that the front forks could be the 43 mm fully adjustable NIX forks.

Another change on the triple-clamp is the use of raised clip-ons. Traditionally, the Street (as well as Speed) Triple is designed from the factory to be ‘streetfighter’ which features a straight handlebar. However, it looks like Triumph is moving away from the traditions and is creating opportunities to probably introduce keyless ignition in the upgraded model.

Further, we can see a splitter just below the DRLs between the headlights. This combined with addition of new plastic panels on either side of the radiator tells us that Triumph has introduced these changes to improve the airflow to optimise the cooling of the bike.

One aspect is still not clear as of now. This new bike spotted on the street, will it be a replacement for the present Street Triple RS?? Or are we looking at a more aggressive, performance focused limited edition bike based on the RS??

We will keep our eyes and ears open for further developments…