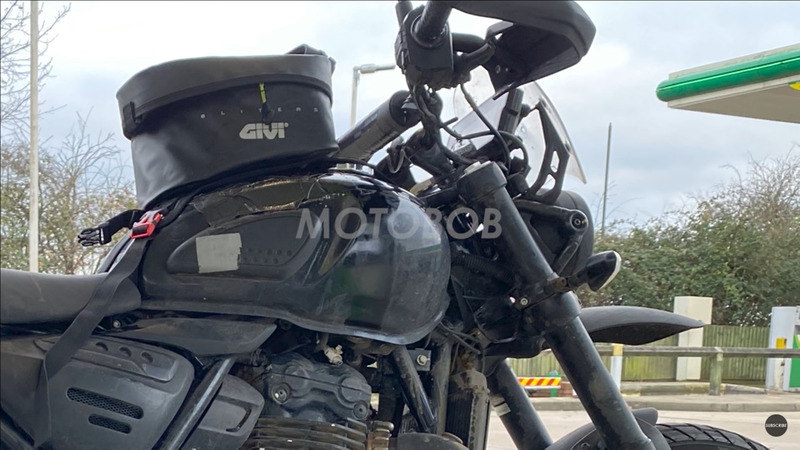 We discuss upcoming Bajaj-Triumph bike details through the spy pics that have emanated on the internet. This is getting interesting…

After a real long wait we finally have the spy pics of the first Triumph-Bajaj motorcycles that were promised few years ago. This reveals the form that the maker is working on. We discuss the product in finer points.

Styling – It carries over the Scrambler look from its older siblings – Triumph Strret Scrambler and Scrambler 1200. It gets a small round headlamp, a tyre-hugging fender along with high-mounted beak fender, knuckle-guards and a small windscreen. Even the exhaust muffler profile is very similar to the double-barrel unit which the bigger Scramblers sport.

Engine and Exhaust – Though, the bike appears to be under heavy testing and all the logos being removed or taped-over, we can see that the engine design is very similar to the Triumph’s Bonneville twins.

It appears to be single-cylinder, liquid-cooled motor with a vertically-mounted radiator at the front, again similar to the Bonnevilles. There is a single exhaust unit exiting the engine, running along the length of the bike and ending with a double-barreled upswept unit looking very similar to its older Scrambler’s iconic unit.

Though the displacement can not be ascertained exactly, we are hopeful of this being a sub 400cc engine.

Suspension – The stature of the bike appears to be tall, but not as tall as the Triumph’s Scrambler 1200 which is their proper scrambler offering. It gets long-travel Upside-down forks at the front and, surprisingly, a monoshock setup at the rear instead of traditional twin-shocks setup other such bikes get from Triumph.

Brakes – The bike will have single rotors each at the front and the rear. The shape and profile of the front setup appears to be lifted directly from the new KTM 390 Adventure and it could be a Bybre unit.

Tyres and Wheels – The test-bike is sporting Metzelers Karoo Street tyres which the company explains are off-road tyres with on-road performance. It is running on 19” wheels at the front and 17” at the rear retaining the Scrambler characteristics. The rims are cast alloys instead of spoked ones which are traditionally used on Scrambler machines. There is another model with 17 inch tyre at the front.

TFT Instrumentation – Unlike the round LCD and TFT instrumentation of Street Scrambler and 1200 Scrambler from Triumph, this test-unit is utilising a rectangular TFT screen which is very similar to the one which we see on the 390 Duke and Adventure. However, it being a test-unit, it might just be using this unit to complete its testing. The final bike might get the traditional round instrumentation, or something else.

This is the first glimpse of what the Bajaj-Triumph partnership is going to offer.

The surprise quotient is that the duo had promised a sub 2 lakh price tag for the first bike emanating out of the partnership. Now the question is – whether this will be it or that 2 Lakh bike will be something different?

Things are definitely getting interesting in this space….