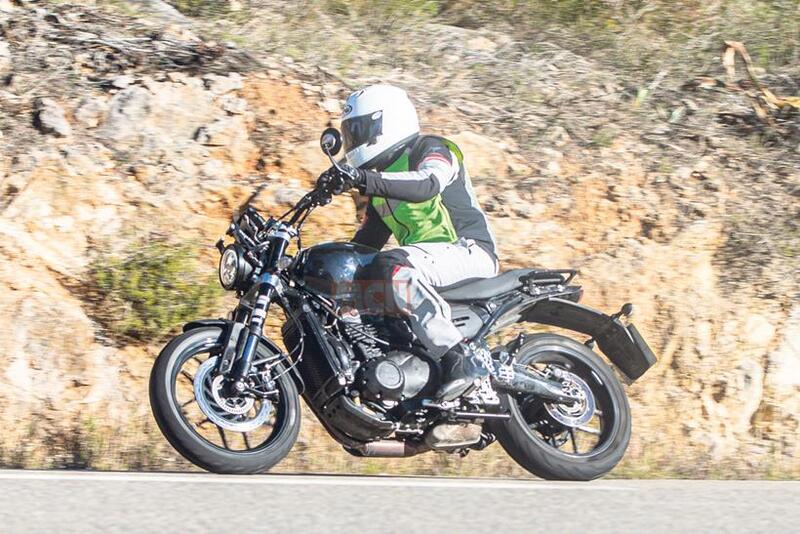 This Bajaj-Triumph scrambler could be the first motorcycle that may go to production but will it be a sub 2 lakh bike as officially announced by the duo!

Yes!! It’s true.. The one set of spy-images we all have been waiting for are finally here. The most awaited bike from the Bajaj-Triumph partnership has been spotted and we like what we see…

It appears from the images that the new bike developed from the partnership is a baby Scrambler, which is sharing a lot of cues from its Triumph siblings.

MCN has shared these first images of the bike which is assumed to be the spawn of the Bajaj-Triumph partnership.

The images of the test-bike are very clear and we can make out a lot of details about the bike. It gets styling inspiration from the bigger Scramblers from Triumph and carries over the retro styling that we had expected.

The engine design also carries inspiration from Bonnevilles and is a single cylinder unit. It comes with liquid cooling and gets a vertical radiator. Exact displacement can not be predicted with precision at this point but it is expected to be a sub-400cc motor.

The USD forks add premiumness and that dual barrel exhaust could be for that additional thump from the single cylinder motor. We are doing a separate article on the finer details of this upcoming motorcycle but for now what we are excited about are the prospects and this could just be the tip of the iceberg!

Bajaj-Triumph had officially announced that their first motorcycle will be priced at under Rs 2 Lakh. The confusion is – is it this bike that the partners were talking about?

Launch has been pushed from 2022 to 2023 due to COVID and we hope to see these mules inching closer to production form in the months to come.