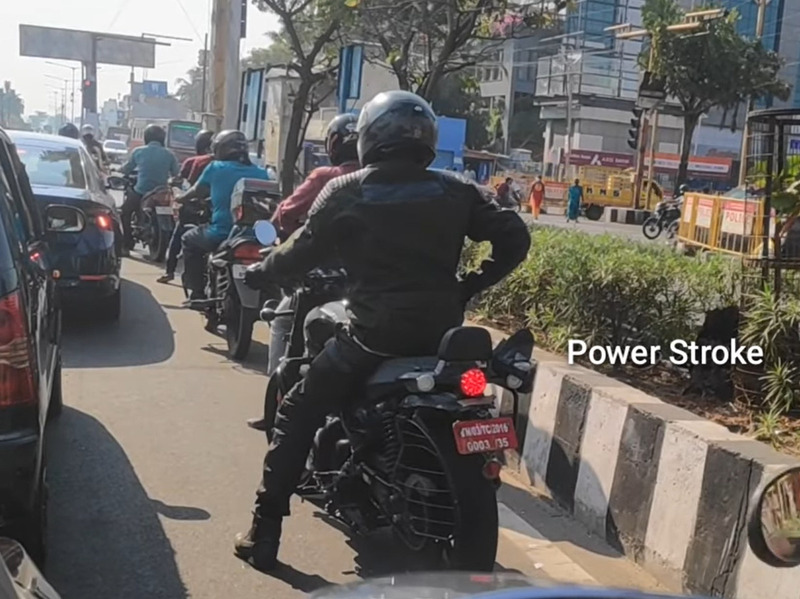 Hear out the upcoming Hunter exhaust note in this story. We also have a view of the motorcycle from some other angles…

We humans are very curious beings. When something new is on the horizon, we want to know everything about it as soon as possible. And when it comes to Royal Enfield motorcycles, just double the curiosity.

And before the Chennai based manufacturer makes it official, we have some new details of the upcoming Hunter 350.

Thanks to a YouTube video, we have some images of the rear of the motorcycle along with its start and exhaust sound. The person who uploaded the video caught the test-bike sitting at a stop-light, giving us some details of the rear section of the bike.

Also read: Official: Himalayan Scram 411 Coming Next Week; All We Know So Far

The first thing we can notice on the upcoming roadster is the low and wide pillion backrest. The images are a little blurred, but we can make out that the pillion backrest connects to a set of grab-rails which seem to be integrated on either side of the bike.

We do get an idea of the seating posture of the rider through the video as well. While the rider was pulling away from the stop-light, we can see that the rider was sitting upright holding on to raised and wide handlebars, suitable seat height and centrally-mounted footpegs.

Other features that jump out are the set of LED indicators and tail-light. And the fitment of the saree-guard at the rear on the test-bike tells us that it is on the final assessment stage and might be ready to enter the battleground of the roadsters.

Reaching the end of the short video, we are greeted with the exhaust note of the Hunter. And it appears RE lovers are not going to be disappointed with the Hunter.

According to the whispers, the Hunter is set to be launched in the later part of the year. Some are saying we might have to wait till Diwali to get a chance to see it on the showroom floors and/or thumping along on our roads.