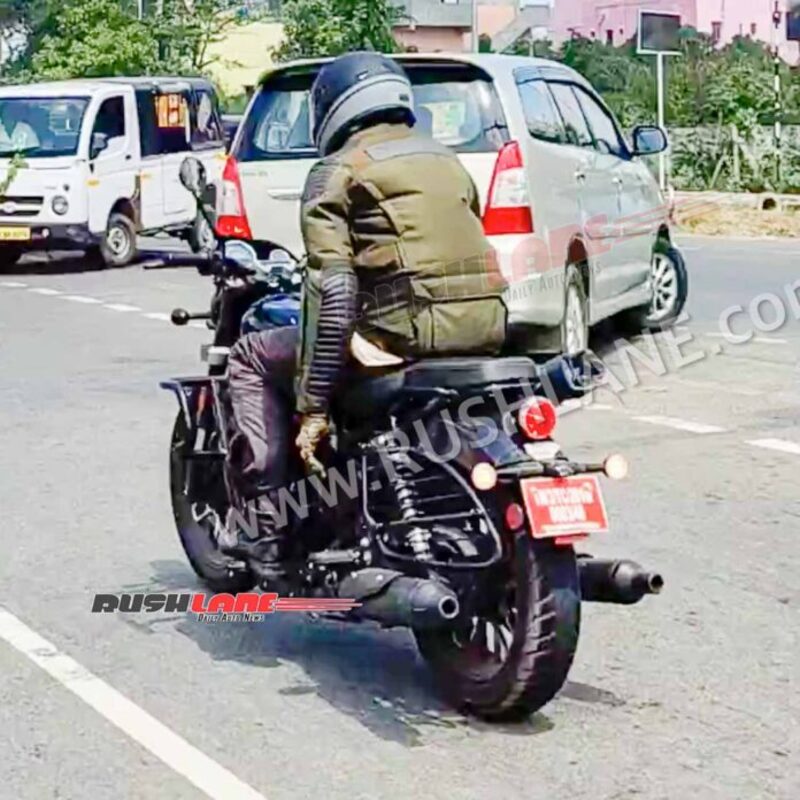 Royal Enfield is planning to add the Classic model to their 650 line-up… After European spy-images, we have our own testing unit as well…

So, recently we shared some images that came from foreign soil showing us that Royal Enfield was testing two cruisers, one resembling the Super Meteor (which has been captured several times testing on our roads) and the other carrying a design very similar to their Classic line-up. While we were scratching our heads with these leaked images, another set of spy-images have surfaced much closer to us.

Thanks to an online portal, we now have spy-images of a cruiser carrying the RE design language and looks very similar to their Classic range.

Also read: Before Royal Enfield Someone Has Already Made the Himalayan 650 Twin

Visually, the cruiser has very similar design elements as the Classic 350 model. It sports the retro design elements such as tear-drop shaped fuel tank, big round headlamp, round tail-light and indicators, broad fenders and flared-out crash guards.

The riding ergonomics on this cruiser looks to be a little tweaked to us. In the images it appears that the handle-bars are a little lowered compared to standard Classic 350 ones which forces the rider to reach down to grab them, forcing a little curve in his back. Other than the handlebars, the seat appears to be of standard height and the foot-pegs are centrally mounted as well.

The cruiser is fitted with a saree guard in the rear section which might hint that the machine is in its final testing phase and might make its appearance on our roads very soon.

The power-unit of this alleged Classic 650 will be the familiar and admired 648 cc, parallel-twin, air & oil-cooled engine which powers the current 650 Twins in India and outside. The engine puts out 47 BHP and 52 Nm of torque equipped with a 6-speed gearbox and a slipper and assist clutch system.

Also read: Royal Enfield Himalayan vs. Scram 411 – How Different Are They??

Suspension on this cruiser appears to be Upside-Down forks in the front and twin shock absorbers at rear. One eye-catching addition is the use of alternate star-pattern silver rims which looks really premium on this machine.

Few months back, Royal Enfield announced that they will be introducing three new bikes based on the 650 platform. The appearance of this machine finally answers our question of which three machines could it be. The Super Meteor 650, the EICMA Concept based Shotgun 650 and this Classic 650.

We are very (im)patiently waiting for these cruisers to make their way to our nearest dealership floors and our roads so that we can own and/or admire them to our hearts’ content.