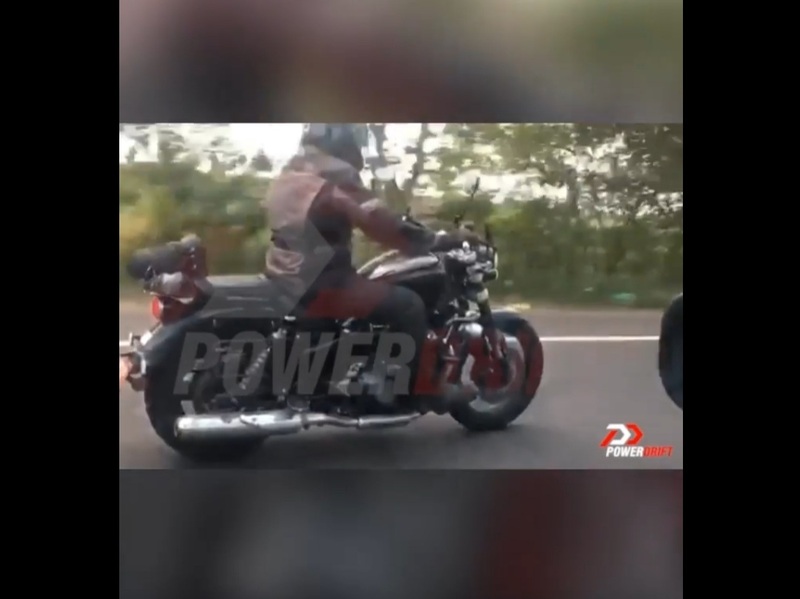 Royal Enfield Super Meteor as it may be called, will be the company’s biggest and possibly the costliest product in the lineup…

It’s Monday today and we all know all the cliches related to the start of the week. But, do we have a treat for you. We are sharing the images of the biggest motorcycle coming up from the house of Royal Enfield.

This model – a cruiser – is expected to be called as Super Meteor and will be powered by the company’s largest production engine – the 650cc twin.

An online portal has shared a reel on Instagram of the Super Meteor 650 cruising effortlessly on the highway. And, My Lord, does it have a presence!

From the screengrabs that we have taken we can see that the bike spotted cruising is almost a production-ready unit probably undergoing final stages of testing and validation. However, the one thing that catches our attention is the heft and the presence of the bike.

The Super Meteor appears to have the classic big cruiser look with relaxed ergonomics suitable for effortless cruising. It is enabled by high-set handlebars, low seat position and forward mounted footpegs.

Other than these, we can see a round headlight, indicators and tail-light at the front & the rear, broad fenders, split-seat arrangement, tear-drop sculpted fuel tank, long under-belly exhaust pipe with chrome finish and back-rest for the pillion.

Even the foot-pegs for the pillion are forward-set to have a similar, comfortable seating posture as the rider.

The RE Super Meteor 650 will be powered by the 648 cc engine which powers the current Interceptor 650 and the Continental 650. It is an oil-cooled parallel-twin motor producing 47 HP and 52 Nm of torque and is mated to a 6-speed transmission.

This is the second glimpse of this bike in production-ready avatar. Earlier, this bike was spotted in one of the Royal Enfield videos showcasing their South Pole expedition that they made to commemorate their 120th anniversary.

This time we hope that we are closer to its launch in the coming months.