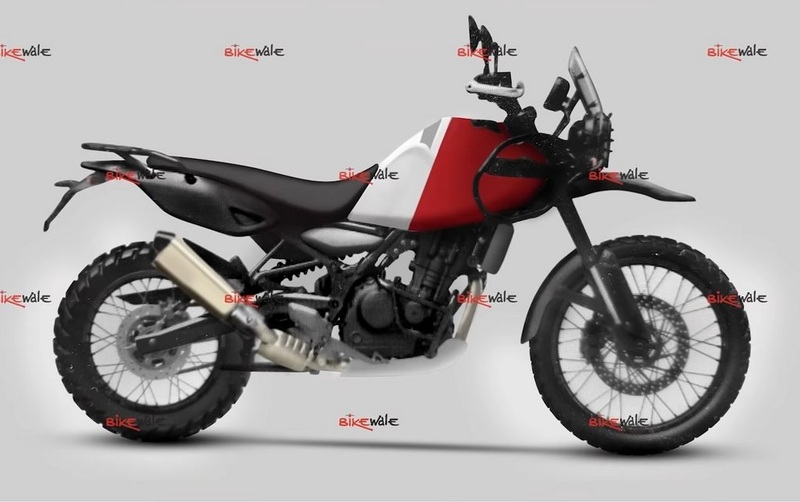 Liquid cooled 40 bhp Royal Enfield Himalayan 450; Is that for real? A website claims this to be an exclusive sneak they have. We discuss…

Wading through the sea of rumors, we have come across a very interesting bit. It is being speculated that Royal Enfield is working on a new 450 cc platform which will, obviously spawn many motorcycles catering to different tastes.

The first product rumored from this platform is – Himalayan 450 – which, in the rendered image, appears to be an evolution of the present Himalayan 411.

The new Himalayan appears to have a premium ADV look, and the claim is that it will directly compete with the likes of KTM 390 Adventure and BMW G310GS along with a few biggies. The evolution from the Himalayan 411 is evident from certain features like rounded headlamp, raised front fender, round rear-view mirrors and similar frame structure.

The similarities still continue – the bike in the rendered image utilizes spoke-wire wheels at the front and the rear which are fitted with knobby tires. The wheel dimensions seem to be similar to Himalayan 411 as well – 21″ in the front and 17″ in the year.

The bike’s ergonomics appear to be upright and relaxed. It is facilitated by centrally mounted footpegs, high-set wide handlebars and a thick saddle.

The rumored bike’s own unique features consist of a compact windscreen, a taller and broader fuel-tank design, and a curved single-unit seat design. The bike has a raw, dirt bike-esque look without any body panels. The under-belly protection and upswept exhaust pipe further adds to the off-roader look of this bike.

The Himalayan 450, codenamed as K1, is rumored to be powered by Royal Enfield’s new engine which will be specifically developed for the forthcoming platform. It is speculated that the new engine will be a liquid-cooled, single-cylinder unit that will generate 40 HP of maximum power. It will be tuned for better low-to-mid range grunt for better off-road performance.

SPIED: Royal Enfield Scram is Ready; But is it a Good Idea?

The Royal Enfield 450 is rumoured to make its debut in 2023. It could be priced around 2.7 lakh – 2.8 lakh undercutting its competitors. This could be an interesting development but we suggest you take it as a rumor at this point till we get something concrete on this…