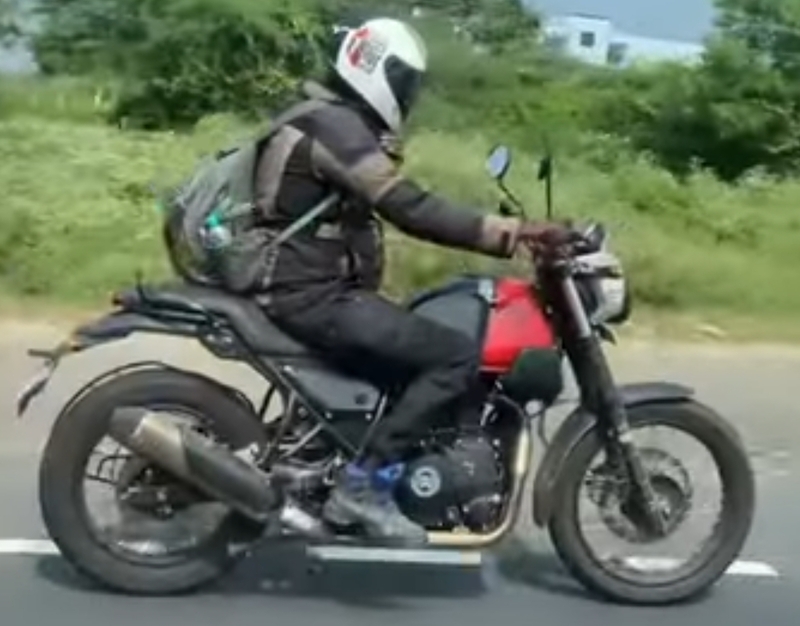 Royal Enfield Scram launch could take place in the coming few months but do answer this question – Would you like to buy a road-going Himalayan?

The year 2022 is going to be very exciting as the rivalry between Classic Legends (owner of Jawa, Yezdi and BSA) and Royal Enfield is heating up tremendously. Just about every week we are bombarded with a barrage of spy-images of machines by these two either in full factory colours or in traditional testing-camouflage.

The upcoming offering by Royal Enfield – Scram 411 – has been spotted again in full factory colours, this time in Red, indicating that these are a series of final tests being run on the bike before it is brought to our roads.

As you may already know, the Royal Enfield Scram is going to be the road-focused sibling of their ADV offering – Himalayan. From the images it is very evident that the Scram will share the basic chassis and engine with its ADV counterpart.

But unlike its sibling Himalayan, which has a very tall and dominating presence on the road, the Scram appears to have a very toned down and subdued presence. This, however, doesn’t take away from the fact that this bike will have its own distinct identity as the mile-muncher it intends to be.

Looks like the Scram will have a slightly different and relaxed upright sitting position, repositioned handle-bars, no front windscreen and a redesigned rear section with change in positioning of tail-lamp and turn indicators.

The styling features of this bike include round headlamp, revised front and rear fenders, side-mounted upswept exhaust system, fork gaiters at the front, single seat unit and redesign single-piece grab-rail for the pillion.

RE Scram 411 will run the same 411 cc, single-cylinder, SOHC engine that propels the present Himalayan. Certain reports have indicated that the air-cooled system will be swapped by a liquid-cooling system. In the current Himalayan, the engine makes 24.3 BHP at 6,500 RPM and 32 Nm of torque at 4000-4500rpm. This motor is  mated to a 5-speed transmission.

The Scram appears to be running on 19″ wheels at the front. It is also expected that the Scram may come equipped with road-focused rubber. The suspension setup will consist of conventional telescopic forks at the front and a mono-shock arrangement at the rear with specific set-up focused for road use. Braking duties will be handled by disc brakes at both ends equipped with dual-channel ABS as standard.

With the RE Scram 411 being spotted again in another factory color scheme, it is safe to say this bike’s launch is just round the corner. But the question is – do we really require a road-going Himalayan? With the same relatively underpowered engine?