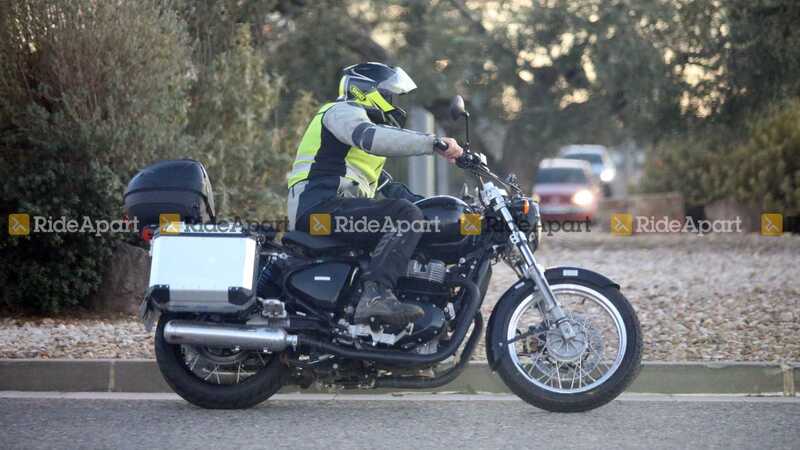 Are these first ever Classic 650 spy pics? Or we are looking at something that has not been talked about till now? Let’s discuss..

We are generally so used to getting spy-images of Royal Enfield test-bikes from Chennai roads that it is a pleasant surprise to get some from an international location. This time we are sharing images of RE testing two of their upcoming 650 cruisers fully stacked-up.

Thanks to RideApart, we have multiple spy-images of two 650 cruisers from Royal Enfield being tested with various accessories and luggage options on international soil. These two cruisers are different from the Super Meteor 650 and the cruiser based on SG650 Concept which were spotted recently testing on our roads.

From the set of spy-images we can make out there are two different cruisers being tested with various luggage options and accessory options.

Both the cruisers share many visual and mechanical elements and appear to have similar riding dynamics as well. Both cruisers have a relaxed and upright seating position aided by centrally-mounted footpegs, swept-back high-mounted handlebars and low bobber-like single seat.

The first cruiser, of which there are various images, carries an all-black theme. The frame, the engine bay, the fenders, the seats, the exhaust pipe outlets all carry a black theme. The only exceptions are the front right-side up shocks which are either finished in Silver or Gold colour and the ends of exhaust pipes finished in chrome.

This cruiser sports the classic retro look of RE with big round headlight, tear-drop shaped fuel tank and the signature body length twin-exhaust setup of the 650s. It is safe to assume as it is the international variant, it must be carrying all the bells and whistles RE has to offer feature-wise.

However, one feature that stands out is the use of two separate seats. The rider has a bobber-like single seat while the passenger has a separate pillion seat. The cruiser is also being tested carrying the Royal Enfield branded aluminium side-cases and a black coloured top-box.

The second cruiser has some very interesting features on it. Though there is only one image, we can make out that this is a different cruiser from the one we have explained till now.

The biggest difference that jumps out to us is the use of Upside-Down suspension at the front along with slightly front-mounted footpegs on the second cruiser. Apart from this, both the body-length exhaust pipes are finished in chrome.

The second cruiser is being tested carrying more accessories than the first one. This cruiser is decked out in a tall windscreen, chrome-finished crash guard fitted with auxiliary lights, rounded side cases and similar black top-box as the first cruiser.

Other than these, it is difficult to make out other features and/or differences from the one image we have of the second cruiser.

The one detail that we are confident of is the engine. It will share the same heart as the current 650 twins – the Interceptor and the Continental GT.

The engine will be the 648 cc, parallel-twin, unit which currently generates 47 BHP at 7150 RPM and 52 Nm at 5250 RPM. Obviously, the tuning of the engine will be different in accordance with the character of the machines.

As we have mentioned it multiple times, Royal Enfield is getting aggressive with its strategy and is planning to launch many bikes based on their 650cc engine.

The next question is – Have we seen the Classic 650 just now?