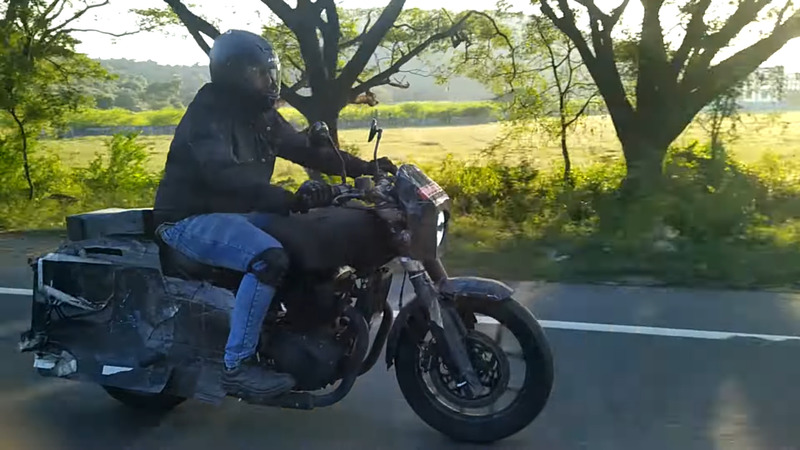 Are these Royal Enfield SG650 spy pics? The bobber was showcased as a bobber last year and may be going through validation phase…

Last year at EICMA, when Royal Enfield unveiled the SG650 Bobber concept, it quickly became one of the highlights of the whole show. It was a big statement from the company to the competition, in India and in the international market, that RE have taken the gloves off.

It appears that the same motorcycle is under tests on our roads as one has been spotted in complete camouflage.

A YouTube video uploaded by user – Raj Kumar – shows a cruiser thumping along the highway resembling the SG650 concept on first look. The cruiser in the video is heavily covered and camouflaged, but a fair amount of detail we can make out about the Bobber.

This mule appears to possess and continue the modern-classic design language of Royal Enfield. It sports the neo-retro elements such as tear-drop shaped fuel tank, round headlight which is horizontally split, spear-shaped turn-indicators, bobber-like single seat, body-length dual exhaust units and broad fenders.

The bobber characteristics are continued in the stance and ergonomics too. The cruiser has a low bobber stance which offers comfortable upright seating posture to the rider, further aided by a low seat, centrally-mounted footpegs and wider handlebars.

In terms of tech and features, we are expecting the bobber to come with many but at the same time keeping up with the retro branding that the brand has been living on. SG650 is expected to get an all-LED lighting setup, semi-digital instrumentation with their tripper navigation system, a USB charger socket, Bluetooth connectivity etc.

The bobber is expected to be powered by the similar engine that is utilised on the current Interceptor 650 and Continental GT 650. It is a 648 cc unit churning out 47 BHP of power and 52 Nm of torque paired to a 6-speed transmission system.

Chassis-wise, the bobber will utilise USD forks at the front and twin-shocks at the rear, which will be a different setup from the current 650 twins. The braking system will consist of single-disc brakes by ByBre aided by a dual-channel ABS system.

Royal Enfield has already made their intention clear that they may launch as many as three new motorcycles in the 650 cc segment. Other than this Bobber, the Super Meteor is expected to be the second model.

Chances are that we may soon hear something from Royal Enfield. And with Yezdi and Jawa spicing up the market, it is getting all interesting in this classic battle!