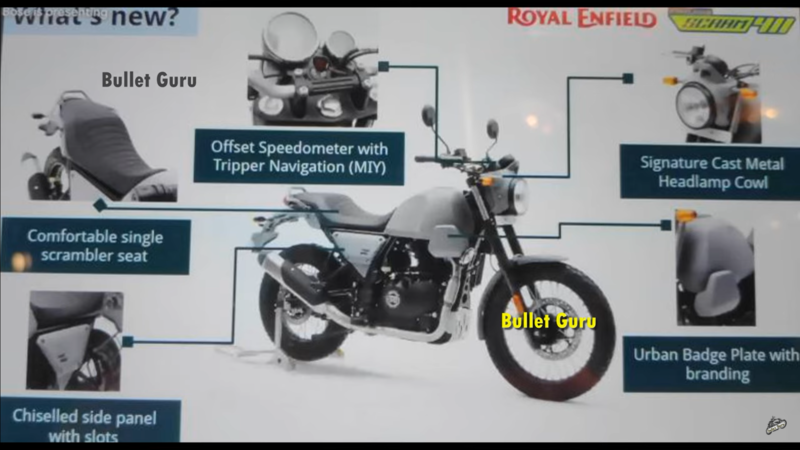 RE Scram 411 launch can be expected as early as next week. It will be the simpler version of Himalayan but what’s the rationale…?

The Royal Enfield Scram 411 has been the talk of the town ever since the first spy-images started making rounds on the internet. Fans and enthusiasts all have been discussing and debating the pros and cons of what would be the roadster-ish version of the Himalayan.

We have been trying to understand the real motive behind Scram’s existence and the possibilities. But all the speculations stop today.

Thanks to a Youtube Channel, the brochure of the upcoming Scram 411 from Royal Enfield has been leaked with confirmed details, accessories and a hint on the expected pricing.

Looking at the images, the first thing that catches our attention is how similar the Scram actually is to its older off-road sibling. It is clear that the Scram has been designed for those customers who want to either use it as a daily commuter or primarily want to tackle long-distance touring on the tarmac.

The Scram 411 continues the retro theme of its older sibling, featuring elements like round headlight and rear-view mirrors, fork gaiters and so on.

The similarities continue as the chassis, the wide handle-bars, the design of fuel-tank, the upswept exhaust-unit and the single-unit stepped seat all are the same as that on the Himalayan.

However, there are certain changes introduced on the Scram which separate it from the Himalayan.

The Scram is going to retain some of the off-road capabilities and it is reflected by the use of spoke-rims which are featuring dual-purpose rubber on it. Another small addition RE has done is the Urban Badge Plate shroud at the base of the fuel tank which will carry the 411 badging on it.

Visually, the Scram is missing the front windscreen of the Himalayan along with the additional beak-fender. The turn-indicators also seem to have a different shape.

The RE’s Tripper Navigation system, which was recently brought to the Himalayan, will be offered as an optional accessory on the Scram. The customer can opt to have the Tripper Navigation pod mounted alongside the off-set speedometer using their MIY program.

The power unit will be the same on the Scram as the Himalayan. The engine will be a 411 cc, air-cooled, single-cylinder, SOHC unit which generates 24.3 HP and 32 Nm of torque. It will utilise a 5-speed transmission system.

There is a high possibility that the engine may be re-tuned for a better mid-to-high power and torque delivery for better mile-munching capabilities.

Chassis-wise everything appears to be the same as the Himalayan. The suspension setup will consist of telescopic-forks at the front and monoshock suspension at rear. The braking will be handled by disc brakes at both ends with dual-channel ABS as standard.