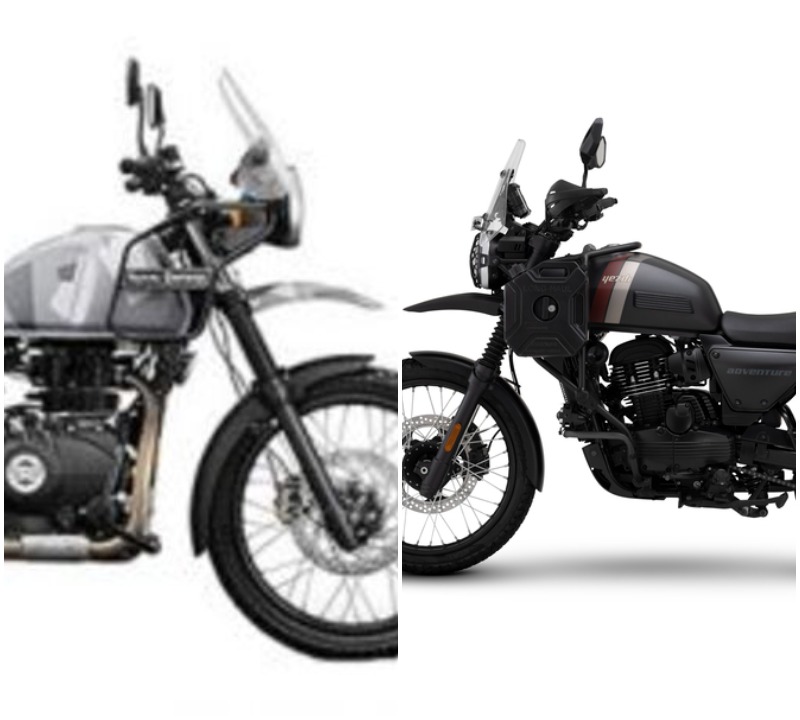 Yezdi Adventure vs Himalayan – So, has the Royal Enfield’s only ADV found its rival finally? We put them side by side in an on-paper spec comparo…

Yezdi spiced up the mid-entry level ADV segment with the launch of its Adventure. The model goes directly against the Royal Enfield Himalayan. In fact, Yezdi got so much involved in the process that they actually made a replica of its rival, almost!

So, let us put the two fiercest rivals together in a spec comparo – on paper.

The engine used in the Yezdi Adventure is the re-tuned version of the robust unit also used on the Mojo. Although having lower displacement than Himalayan, the power output is higher. However, Royal Enfield takes the cake in the more important unit – torque.

This leads us to believe that the Yezdi ADV would be better on the highways, however, the Himalayan, just may be more liberal on slower, rough roads. That the Yezdi has an extra cog to play with, adds to our belief further.

On paper, other than the frame, both the ADV rivals are very similar to each other. In fact such is the similarity that we can interchange data for both the motorcycles without being untrue!

Front and rear travels of both the models are also absolutely identical. It will be interesting to see how have they been tuned.

The Himalayan has a more accessible seat height, however, the Yezdi Adventure triumphs over it in weight – it is 11 kilos lighter that the Royal Enfield.

Yezdi have carried over the same tyre size of 21-17 inch of the Himalayan, however, it comes with a slightly wider rear tyre. Along with a bigger front disc, we believe it could be have better response from the rubber.

While the Yezdi comes with an adjustable (for tilt), all digital instrument console, the Himalayan makes do with a combo of digital and analogue and it is what looks better.

Both the ADVs come with dual channel ABS, however, the Yezdi has more modes.

The Yezdi comes with all LED lighting and a few additional features that the Himalayan misses out on.

On paper, The Yezdi appears to be a worthy competitor with better engine output, 1 extra gear, higher feature set and that it is cheaper by nearly 5k adds to the value.

However, features and bling is not what decides the winner in this segment. It is the motorcycle that does its job better – with a more focused rev band – is more preferred. We hope to ride them back to back to understand if the Himalayan has finally found its chief nemesis!