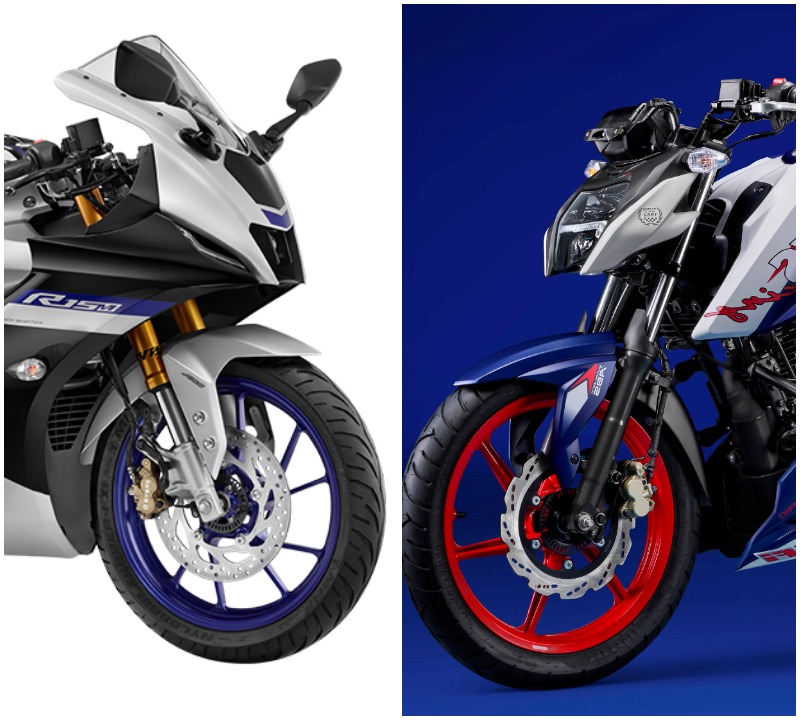 TVS has launched the most powerful bike in the 150 cc segment in the form of race-focused Apache RP165. RP here stands for Race Performance – a new moniker that TVS has introduced that will produce performance-oriented motorcycles.

It has dethroned the Yamaha R15 V4 which was the king of this segment till now in terms of outright power.

Let’s see how these bikes fare against each other.

No doubt that R15’s 155cc motor is more advanced and in reality a gem! But, probably owing to a slightly bigger displacement, the Apache 165 churns better power figures here – a difference of around 0.8 PS – at the same 10k rpm.

The torque figures are the same for both the bikes, however, the sportier R15 produces it earlier. It also gets one extra cog to play with.

R15’s deltabox frame is a super genius when it comes to track performance and handling. Apache carries the same frame of the road-going Apache 160 that is known for its superb handling. In place of USDs of the R15, the Apache comes with telescopics from Showa that the company says are tuned for racing.

The ground clearance of R15 is lower than the Apache 165 RP which translates to a lower center of gravity, hence, better agility

Despite the bulk of that full fairing, the R15 is 6 kilos lighter than the Apache. This may probably null the minor power gain that the TVS has. A lower wheelbase means that the R15 may be more maneuverable than the Apache.

The seat height, on the other hand, will aid more riders to be ‘grounded’ on the Apache in comparison to the R15.

In terms of pure numbers, the front disc of the R15 is bigger whereas the rear disc of the Apache has a larger diameter. R15 comes with wider tyres – both front and rear but the major feature add-on where the R15 scores is the presence of dual channel ABS.

In terms of pricing, the R15 is way more costly but it packs in a lot of ammunition and has been a crowd favorite since the last decade or more.

In terms of important features, both the Apache 165 and R15 get race-tuned Slipper Clutch as standard. Yamaha one-upped the Apache by adding the Quickshifter (upshift) to the R15 on some variants.

On paper, it appears TVS has created a nice little performance machine that, inadvertently, competes with the majestic R15. We haven’t ridden the new Apache yet so it is difficult to talk about its on-road performance.

Theoretically, the Yamaha is more suited for the track as it carries a fully-faired design with better profile tyres and a quickshifter which will aid in better performance in the straight-line as well as corners. But how these machines stand against each other will only be known once we test them back-to-back. Stay tuned…