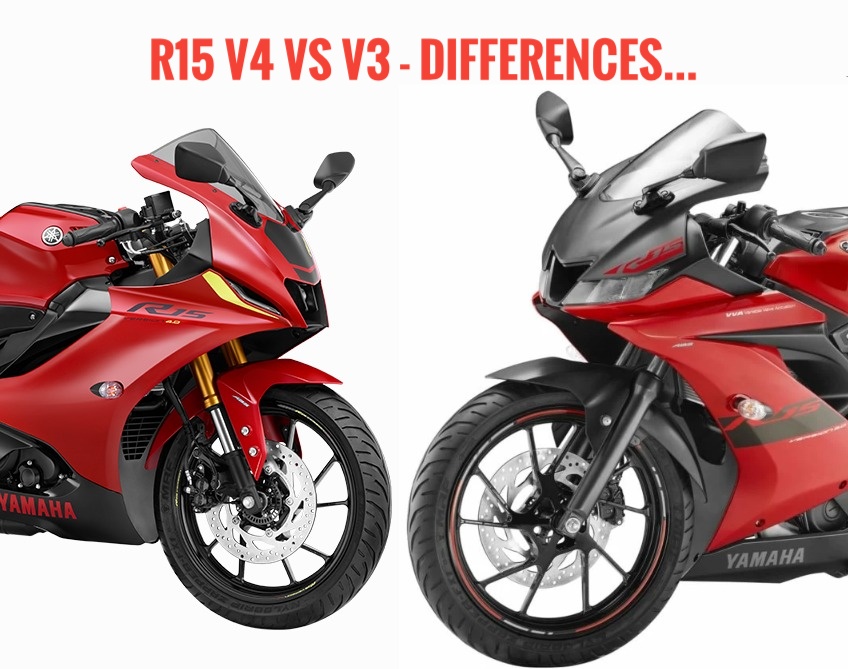 While we are busy welcoming the new R15V4, potential customers of the loaded faired sports bike may be confused regarding which model to go for since Yamaha appears to be keeping the older version 3 on sale, at least for the time being.

In this write-up let us list all the spec and feature differences between the R15 v3 and v4.

Styling: The biggest difference, is obviously, the design of the new R15 V4. The styling is completely changed and replicates the bigger R7. It has a single headlamp at the front along with twin DRLs on each side.

Headlamp: The R15 V4 comes with a class-D LED projector headlamp whereas the v3 gets twin LED lamps.

Engine: The powertrain largely remains the same though on the official spec sheet there are minor differences. At 18.4 PS the new V4 churns 0.2 PS lesser power whereas it churns 0.1 Nm higher torque (14.2 Nm) which also peaks 1000 rpm earlier (at 7500 rpm)

Major changes come in the form of the big feature set the V4 has received. Here is a list…

The older model did not have any of the above mentioned features. The V3 comes with Assist and Slipper Clutch that has been carried over on the V4 as well.

New Instrument Cluster – Yamaha has also given the R15 a new instrument cluster which shows extra info, however, it remains an LCD unit.

Bluetooth – As announced earlier, the R15 V4 supports Bluetooth connectivity which gives it the versatility of smartphone pairability via Yamaha’s native app. The V3 comes devoid of this feature.

The R15 V3 is not offered in MotoGP Edition nor does it have the silver ‘M’ finish model. The older Thunder Grey has not been carried over in the new model.

So, there we have it – the V4 is a major update to the R15 and we are very excited to test it out whenever Yamaha scheduled a ride experience…