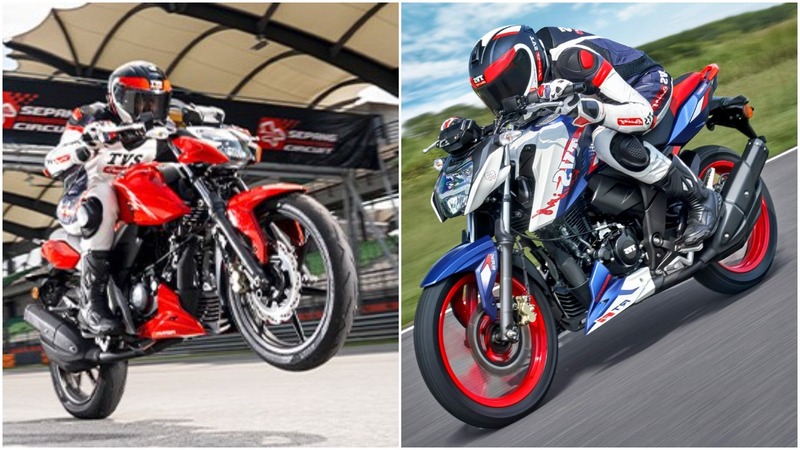 Apache 165 vs Apache 160 differences list comprises changes to the engine, suspension and various other areas. We list them all…

TVS has recently launched its new Apache RP 165 in the Indian market. It is based on the company’s 160cc 4 valve model that is sold under the RTR moniker. At a major premium, you are sure to ask this question – what is the difference between these two siblings…?

Engine – The Apache 165 comes with a slightly (5cc) bigger engine that (we believe) has a bigger bore than the motor of the 160.

Suspension – Unlike the conventional front forks of the Apache 160, the Apache 165 is equipped with Showa race tuned telescopic forks. Rear also gets a Showa race-tuned unit.

Weight – Because of the added kit, the bigger Apache weighs 148 kilos, 2 kg higher than the Apache 160.

Availability – TVS has announced the Apache RP 165 to be a limited edition model. Only 200 units of this motorcycle will be produced. Whereas the standard model continues to be available without any constraint.

Styling – While the basic design hasn’t changed, TVS is offering the Apache 165 in a new sporty Sepang Blue color shade. It is a combination of blue and white with subtle red slashes.

Racing Features – In order to give it more grunt, the RP 165 comes with a dome shaped piston, dual actuator springs, larger valves and high-lift cams.

Price – For all the added oomph, TVS is charging a premium of roughly around Rs 25,000 (launched at 1.45 Lac ex-showroom) for the RP165. Exclusivity is complementary!

The RP is an interesting concept and the first glimpse has been exciting. We hope to see many models come out of this new sub-brand.

So, in the end, the question is – Which one will you buy between these…?