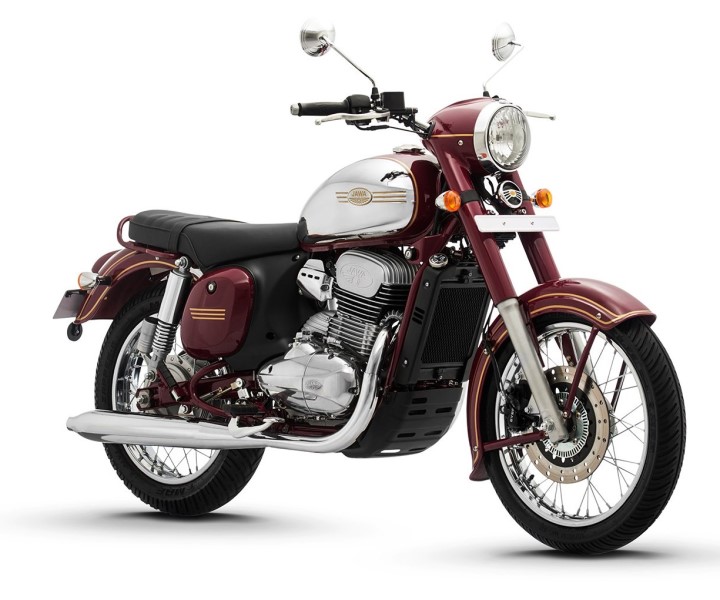 Jawa BS6 specs have been updated after more than two months from their first announcement. We list the changes…

Although Classic Legends announced the launch of the Bharat Stage 6 compliant versions of both Jawa as well as the Forty Two back in March this year, it did not disclose their specs. The press announcement just said that they are ‘similar‘ to the outgoing models (launch story).

After a long wait, these specs have been finally been updated at the official website and it lists fair bit of changes to the specs. The single cylinder, 293cc , liquid cooled, DOHC engine now produces 26.51 PS of peak power and 27.05 Nm of max torque. Peak rpm numbers have not been provided.

Rest of the specs listed on the website appear to be unchanged including the 6 speed gearbox, seat height of 765 mm and fuel tank capacity of 14 liter.

Jawa Perak & Others to Go On Sale in Europe This Year

Both the Forty Two and Jawa had a kerb weight of 170 kg which has now increased to 182 kg – a very major increase of 12 kilos or 7 percent! This will result in a significant erosion of the power to weight ratio of these motorcycles.

Update – Jawa has informed that it was a mistake and the correct weight of 172 kg has been updated at the website now.

Classic Legends says that both these motorcycles now come with country’s first Cross Port technology which has allowed the characteristic twin exhausts. Another major change is the segregation of the variants based on their colors. It is now charging more for popular shades. You can check respective prices here.