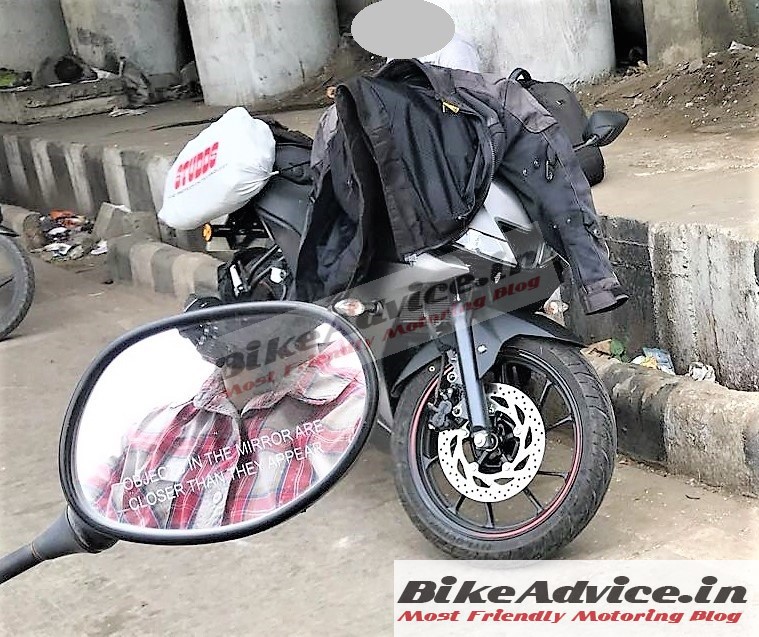 All you people waiting for it… Yamaha R15 v3 Launch soon!

So yes, Yamaha did leave us surprised here! We gracefully accept that we never thought it is coming this soon. Whenever we had a word with the company’s top officials, there was this clear expression on their faces that “why are you asking this question again and again, we do not intend to bring it here!“. However, the new R15 v3 is, for the very first time, spotted testing in India and this news is brought to you by none other than your favourite auto portal – BikeAdvice.in. This comes barely after we leaked the Intruder 150, again a first for Indian auto media 🙂

This spy pic shared by one of our avid reader Prashant was clicked yesterday in Delhi while he was commuting with his wife on his Aviator. He says that the bike looks much bigger and the twin headlamp unit has DRLs. Upon asking the tester (who was more concerned about not allowing Prashant to click pictures) whether they were testing the new R15 for India – he replied in the affirmative.

MRF tyres and that ideal state in which Yamaha’s domestic-market test mules are generally spotted in, is a confirmation that the motorcycle is indeed headed to our market. Also notice the omission of premium upside-down front forks and in place are the conventional units; clear signs of keeping costs under check.

The next big question is – will Yamaha continue with the same 155 VVA single cylinder motor of the version 3 used around the world or will they, specifically for our market, plonk the existing 149 cc single? By the looks of it, it appears to be the 155 cc engine.

The new R15 v3 produces a significantly higher 19.3 PS of peak power and 14.7 Nm of max torque. In terms of features it gets slipper clutch, broader tyres, bigger disc brake and continues with the very precise Deltabox frame. You can read all the big changes here. How much of it percolates to our market needs to be seen.

Unlike our Indian manufacturers, these Japs let out the very final test mules for validations on the roads. After the FZ25 and Fazer 25 were spotted for the first time on the roads, the motorcycles were eventually introduced within three odd months and hence expect the Yamaha R15 v3 to be launched around December-January in India – yes this soon! This is apart from another motorcycle in the ‘R’ brand Yamaha has confirmed is coming!

You can also win surprise gifts by sharing such spy pics and exclusive sneaks.