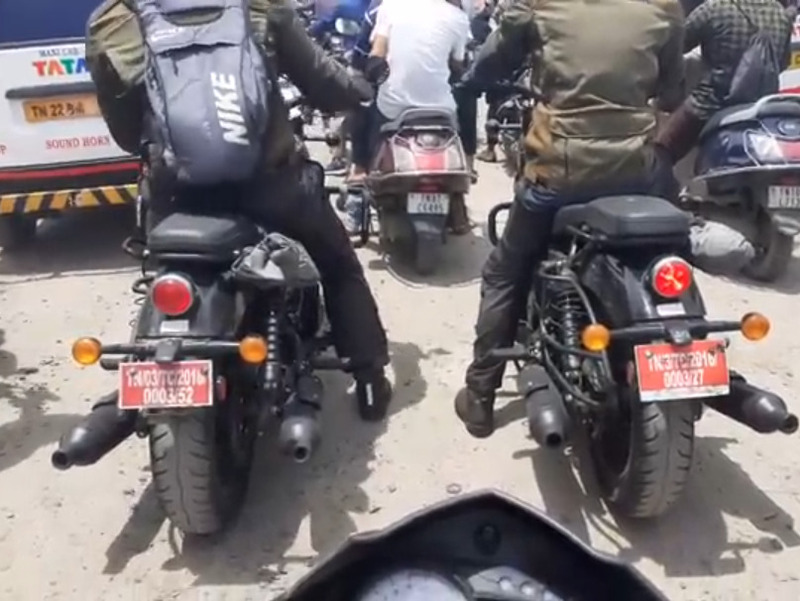 So, Royal Enfield is back to testing their upcoming bikes in pairs. Earlier, we shared images of RE testing the upcoming Hunter 350 in pairs, or it with the next-gen Bullet 350. In one instance, the Super Meteor/Thunderbird 650 has been spied testing with the new Shotgun 650 as well.

Our theory behind RE testing their upcoming bikes in pairs is that after the company’s R&D department is done with all the parameters of the individual testing of the bikes, they are trying to benchmark the performance of their next products to the ones that are production-ready.

For example, the next-gen Bullet 350 has been spotted being benchmarked against the launch-ready Hunter 350. While in another instance, the Super Meteor/Thunderbird 650 has been spied testing with the upcoming SHotgun cruiser based on the SG650 concept. In both these cases, the Hunter 350 and the Super Meteor/Thunderbird 650 are production-ready, with the Hunter 350 launching in 1st week of August.

With thanks to Motor Vaahan for the video, it captures the 2 Shotgun 650 bikes on test from the rear very clearly. This gives the idea of how the upcoming cruiser could look from the rear.

It is expected that the cruiser based on the SG650 concept showcased at the 2021 EICMA event will launch after the introduction of the premium model Super Meteor or probable name Thunderbird 650. Looking at the design elements of the bike and the use of non-LED, amber-coloured turn indicators, we predict that this cruiser will most probably be slotted below the Super Meteor or even the Continental GT.

Looking at the rear of the Shotgun, the most prominent design element that jumps out to us is the use of matte-finished, flared dual-exhaust pipes. Compared to how the Super Meteor/Thunderbird 650 test-bike, which has low-slung parallel chrome-finished dual-exhaust pipes, these flared-out exhaust pipes are the major differentiating feature of the upcoming Shotgun.

The overall fit & finish of the cruiser indicates that the Shotgun 650 is in its final stages of testing and, as mentioned earlier, is undergoing the benchmarking phase of testing.  The near-production bikes sport split seating, a crash guard/leg guard with auxiliary lights mounted to it and bar-end mirrors. These bikes are also equipped with twin-pod instrumentation, with the smaller one being the proprietary Tripper Navigation pod.

The cruiser is suspended on a set of USD front forks at the front and dual-springs at the rear. The test-bikes are rolling on alloy wheels and get a single disc at both ends. Powering the upcoming Shotgun 650 will be the popular 650 cc, twin-cylinder motor from the current Interceptor 650 and the Continental which boast similar output figures as the current 650 twins – 47 HP and 52 Nm of torque.

Expect the Royal Enfield Shotgun 650 to make its debut somewhere in the middle of 2023. Wondering about the Super Meteor/Thunderbird 650?? We are expecting it by end of this year.