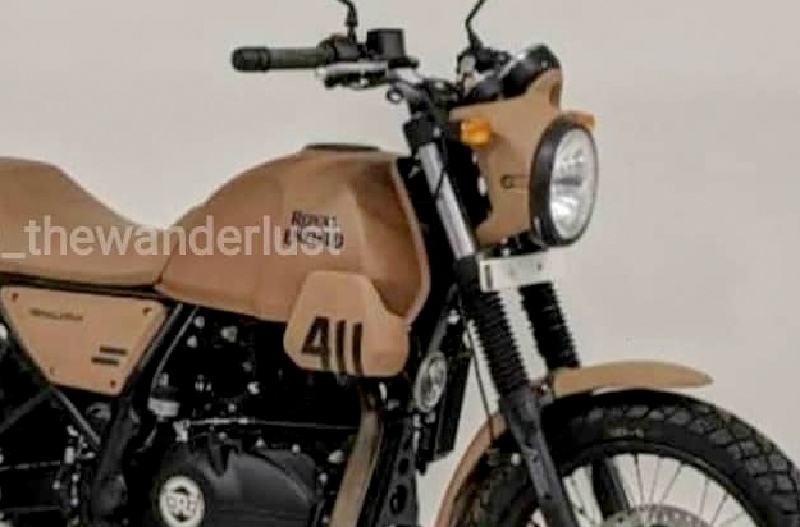 Rumored to be called as Royal Enfield Scram, this is essentially a more road-biased Himalayan. But it does have few noticeable changes…

Even before the launch of the new Himalayan, Royal Enfield was seen testing a slightly different model (of the ADV). That motorcycle has now come to the spotlight as, after a few spy pics, its clay model has leaked, revealing the exact styling and proportions.

Rumors claim that this new model could be called as Scram. Royal Enfield patented this name few weeks back and it is believed to be a short form of Scrambler (more details).

As compared to the Himalayan, the upcoming model has a smaller front tyre which appears to be a 19 incher (against 21 inch of the current Himalayan). The big front visor is gone and there is a mask covering the round headlamp now.

Himalayan’s signature exoskeleton is also not seen here and in place is an extended tank shroud proudly flaunting ‘411’ tag, that, kind of, confirms the engine displacement. The rear grab rail is different and there is no rear luggage rack. There are minor changes to the side cowl as well as the seat.

Royal Enfield has this knack of launching motorcycles with little changes under different names. So, a possibility of this road-biased Himalayan being labeled as Scram can not be ruled out.

Next-gen Classic 350 is scheduled for launch in August 2021 and this Royal Enfield Scram (or Himalayan Scram) could be in the pipeline for this year itself, considering that there is not a lot that the company would need to change on this one…