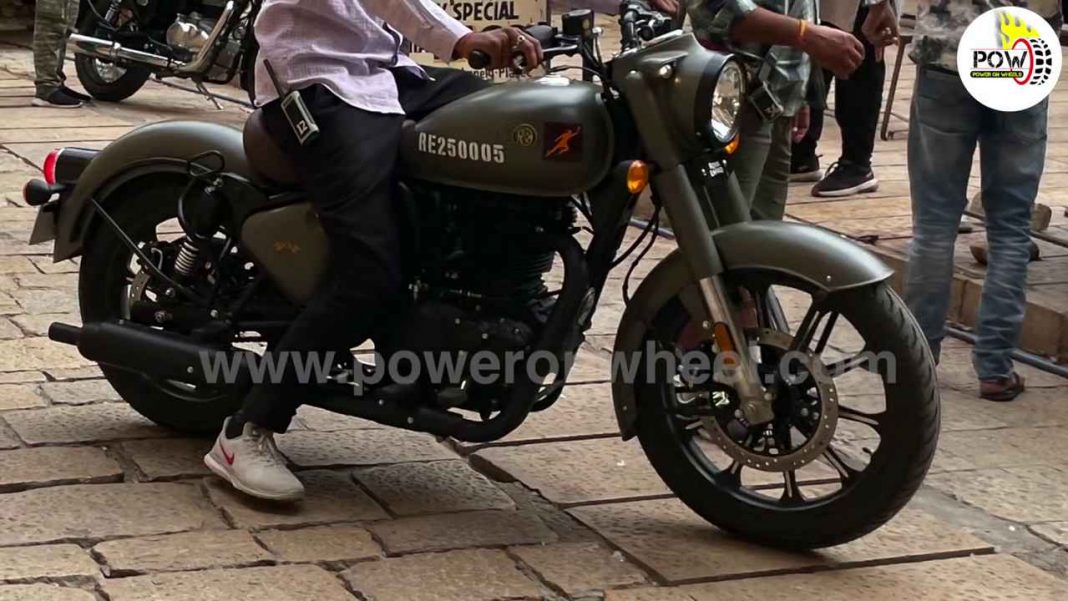 2022 Classic 350 launch date very soon since Royal Enfield is already preparing its marketing material. It has been spotted during promo shoots…

Talk of the classic and the Classic is here! Just yesterday, we shared the clearest shots of the upcoming 2021 Classic 350 from Royal Enfield.  Today more photos and videos of the new upcoming motorcycle have surfaced. The spy images and the video is probably an unofficial snippet from a promo shoot of the 2021 Classic 350.

There are four different production colors in which the 2021 Royal Enfield Classic 350 has been spotted in this video.

This spotting also reveals Classic 350 Signals Edition (with dual-disc brake) which is a homage to the Indian army. Usually, in the Signals edition, the serial number of the motorcycle is etched on the tank.

As we know from our previous coverage of the new-gen Classic 350, it will be available in single-seat as well as split seat design.

There are more choices as well. The Royal Enfield cruiser will come in dual disc brake and rear drum brake variants.

From the latest imageries, the Classic 350 with a single seat will be offered in dark green, matte grey, and desert storm finishes, at least.

It also gets Royal Enfield branding on the fuel tank, Classic branding on the side panels, and fenders on both sides. Coming to the split seat model of the 2021 RE Classic 350, it is offered in glossy grey color.

Few months back Vinod Dasari, CEO of Royal Enfield mentioned that the company will launch new motorcycles every quarter.

Since this has been spotted during promo shoots, it is evident that Royal Enfield is ready with the Next-Generation Classic 350 and it is only a matter of few days before we hear about its launch date!