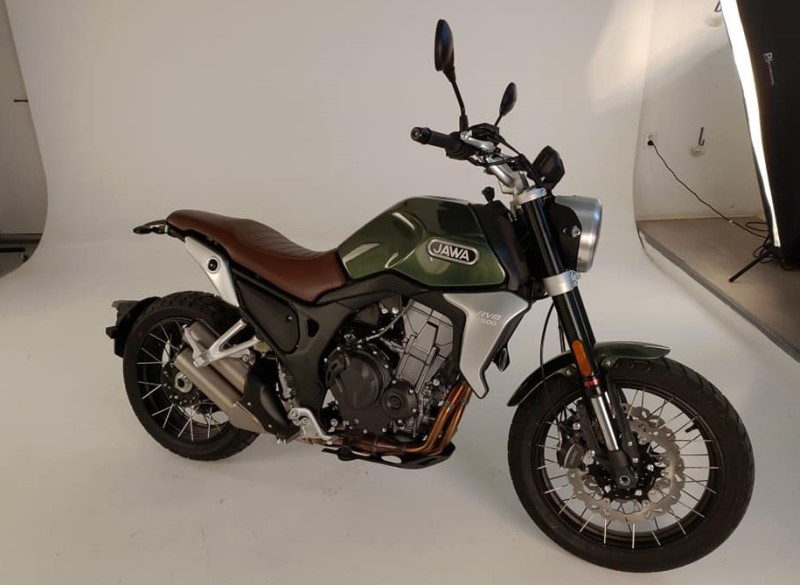 Apart from Classic Legends (that is now owned by Mahindra), Jawa branded motorcycles are also made in Czech Republic. Apart from the Jawa 300 CL (the standard Jawa as we know) that is sent from India, the Czech entity also sells few other motorcycle models. Some of them appear to be rebadged versions of other models.

In a latest update, Jawa has introduced a new scrambler in the Czech Republic which is called as RVM500, if we go by the official Facebook page. Interestingly there is another motorcycle model that goes by a similar name that is on sale in the market – but it is faired sports tourer and is a rebadged model which has its origins in China (check it out here).

So, the RVM500 scrambler is a rebadged version of Bristol Veloce 500 that is manufactured in China. It comes with a 471cc, parallel twin cylinder engine that pumps around 45 horses. Jawa has simply pasted its stickers and in fact it has brought the same colors as well – red and green.

We are not sure about the exact linkage (and understanding) between Classic Legends and the Czech company but there appears to be no possibility of India getting either of these Chinese rebadged machines (the 500s).

The business model of Classic Legends is different and chances are that it will develop its own bigger capacity engines for the upcoming BSA models (more details).