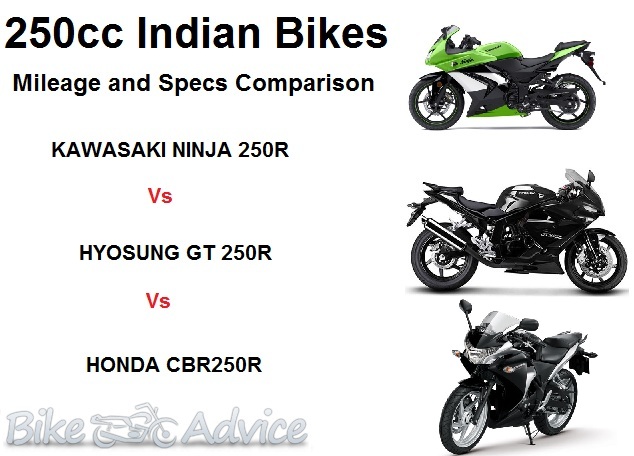 The 250cc segment, although a relatively new segment as compared to the others has however seen a lot of talk and action from the manufacturers and Indian bikers alike in the recent years. It is very enthralling to see the shift in the preference of consumers and bike lovers from small motors to big displacement bikes, bikes that truly let you enjoy the ride rather than just doing a job of ferrying you from point A to point B. The first entrant to the 250cc segment again hails from Bajaj, the mean, green Kawasaki Ninja 250R.

Note: Best 250cc Motorcycle Reviews – Click on the bike names to read respective reviews, these are some of the best bike reviews at BikeAdvice.in, don’t miss them.

Ninja created quite a stir but couldn’t become a very sought after bike due to its high price. Honda Motorcycles, last year addressed this problem very well by bringing in the Honda CBR 250R, amazing VFR style looks and a killer pricing did the wonders. Witnessing this action, recently re-forayed into India, Korean manufacturer, Hyosung brought in their GT250 (naked) and the GT250R (faired). We have done a detailed technical specification comparison of these 250cc beasts below to give you a fair idea where they stand with respect to the each other. And of course, we have compared the mileage with user reported figures as well.

Check out our other motorcycle comparisons: