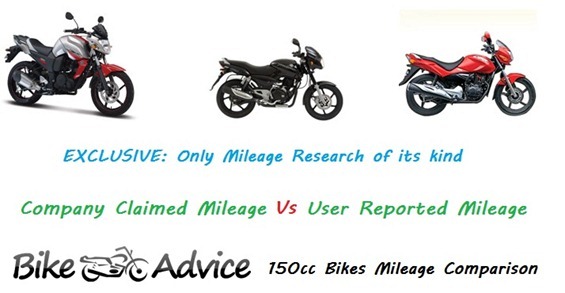 The Indian 2 wheeler industry, especially the 150cc segment has been growing incredibly well with more and more international players vying for a better share in the market. On the other hand, soaring fuel prices has made it difficult for the Indian consumers to go for the vehicle they really desire to own. I know few friends who dropped their desire to get a quarter-litre or bigger displacement bikes due to the drastic change in gasoline prices. This brings out a very important parameter which defines the success of a bike model in the Indian market- the mileage.

In this post, I talk about the 150cc segment bikes– the most popular displacement category in the Indian market. The 150cc segment has been by far the most popular segment of bikes to have been launched in the Indian market with the latest introduction being the Honda CBR 150R. The 150cc is also one of the most dynamic segment ranging from the Yamaha R15 V2.0- a full-bred sports bike to the commuters like the Bajaj Discover. I am sure this comparison will come in as a very useful reference when you are planning on your next bike purchase. Stay tuned for the comparison of other categories of motorcycles which will be posted shortly.

About the accuracy of data: Over 7,000 readers submitted their motorcycle mileage report to BikeAdvice, the above economy comparison chart is based on the average of that user submitted mileage data.

How does your bike mileage stand out?, does it agree with the comparison table above?, post your views, mileage figures in the comment section.

Special thanks to BikeAdvice readers for taking part in the mileage survey and making this comparison possible.