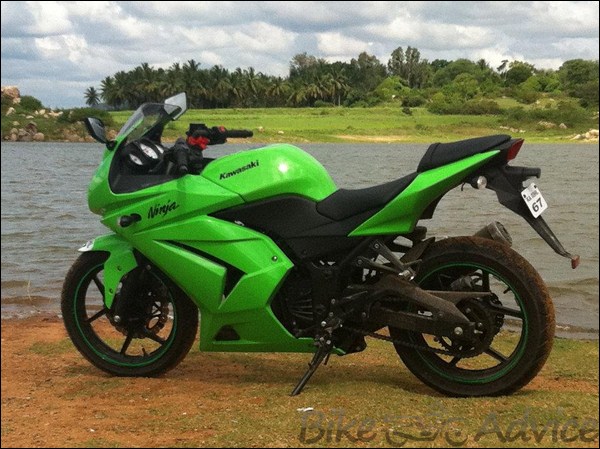 Hello friends, this is Kirti Solanki and I ride a Kawasaki Ninja 250R. Here’s my brief intro-I’m a hardcore biker, 2nd year engg. student in RVCE Bangalore and I’m from Patna. This is my 1st ownership report. I dont know if I could write much about the ownership experience yet. I make a pretty bad writer too so kindly bear with me. 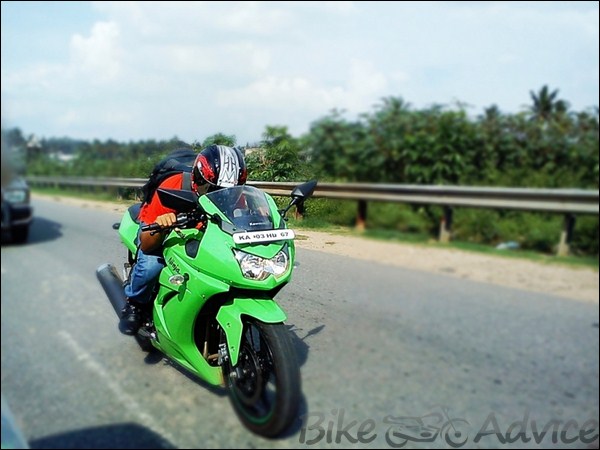 How it all started?

I was fortunate enough to be with people who taught me riding a bike at a very young age (11) and my parents never objected it, though they were apprensive. Special thanks to Yamaha YBX/Rajdoot/RX-Z/CruxR/Libero on which I learnt riding and people who taught me riding. Like all the other kids in school I was also fascinated by the idea of owning a bike and going on long rides.

I used to collect pictures of the sportsbikes from magazines/posters (and I bet almost everyone here would have done the same). Daydreaming about owning the R1 has always been my favourite past time (even now). Back in 2007 when I was in 10th std. the Pulsar 220 dts-fi was launched, I began fantasizing about owning it after I saw it’s advertisement in the newspapers and who can forget the “pulsarmania” ad!? 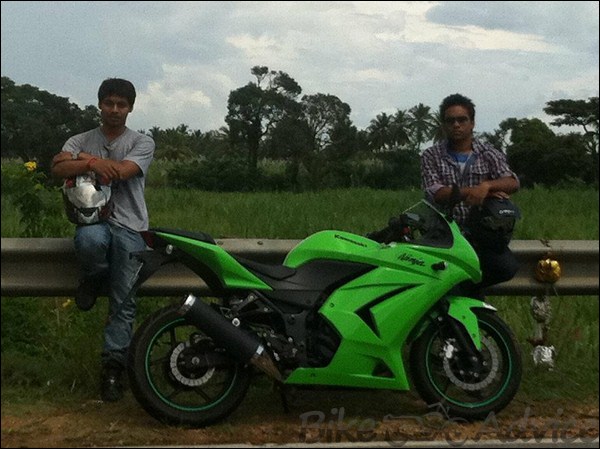 Then one day I rode the Apache RTR 160 which belonged to one of my relatives and immediately I fell in love with it. Whenever I sat to study at night I just couldn’t keep my mind off thinking about owning it. Then in May 2008 the R15 was launched and I suffered many sleepless nights after its launch. But the bike that made me insanely fall in love was the FZ which was launched in september 2008 and it made my urge to own a bike even stronger, I told my parents that I can’t live without a bike anymore. I convinced my parents to buy me the FZ.

But then they told it was too powerful to be the 1st bike. So I had to choose from the 100cc range and finally on 5/12/2008, I became a proud owner of the Yamaha Libero-G5. For me it was the most beautiful thing in the world and I couldn’t stop admiring it. It was a childhood dream come true for me. I began practising proper riding techniques while braking/cornering etc. After reading in magazines and watching videos on youtube.

It was that time when I started being involved in street racing and drag racing. Later in May 2009, I somehow managed to ride an R15, now what? I quit thinking about everything else and told my parents straightaway that I wanted the R15. My parents agreed and finally I got the R15 on 05/08/09. My happiness couldn’t be described in words. I began to get even more involved in street racing (it is a very stupid thing to do).

I smoked a guy on a Pulsar 180 once, and he immediately wanted to ride my bike. I don’t know why, but I gave him the bike to ride just for a few kms and we became friends. One or two months later he bought the R15. I was very happy with my R15 and I felt invincible, a few months later I saw a Black Ninja 250R in my city. After a few days I saw that same P180/R15 guy riding the same Ninja 250.

We both were coming from the opposite direction and we identified each other and we stopped. Without speaking a word he gave me the key of his Ninja and told ” Ride it 1st, we’ll talk later”. I just didn’t know how to react. I rode the Ninja 250 for the 1st time on 15/06/10. However I rode it slowly. Later I got into RVCE and came to Bangalore. 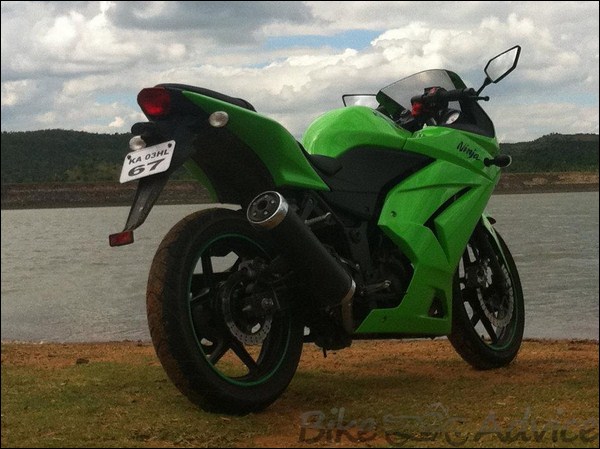 In the college on the 1st day itself I saw a green Ninja parked. After a few months after settling in the college, the bikelessness began haunting me once again and after a few days I came to know that the green Ninja that I saw belonged to one of my classmates. I test rode it and got scared of the acceleartion.

Again I told my parents about it, and after a little bit of convincing they agreed. On 23/04/11 I booked a green Kawasaki Ninja and I was told a waiting period of 3 months. Then in the summer vacations I went home and finally on 04/09/11 I became the owner of the Ninja 250R. 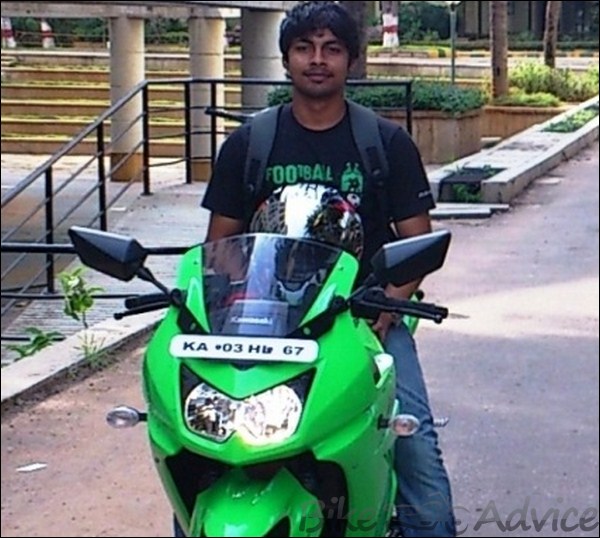 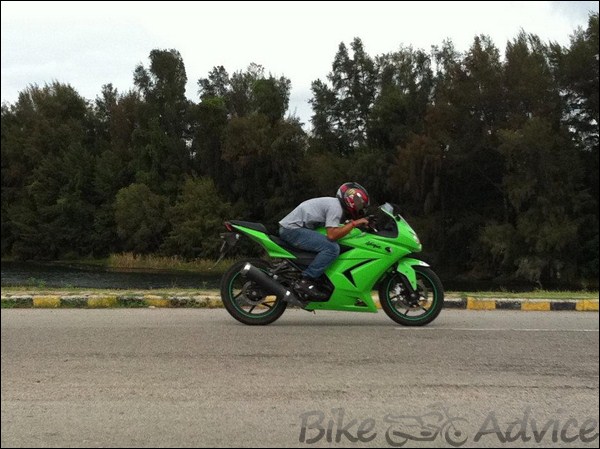 I was scared by the acceleration when I first test rode it. It is a screamer and the engine is not so strong into the lower revs, say below 4Krpm. Nearing 6K to 8K you really start to feel that theres going to be a big boom underneath the fairing. The engine seems to be bracing itself up for the maximum oncoming onslaught of power delivery and nearing the 11K the front becomes very light and when it is upshifted to 2nd at the 13k redline then there’s a small power wheelie or a ferocious jerk forward depending upon the precision of the gear-shift.

The rev-limiter is at 14500rpm. You have to be very careful with the throttle and 1st you need to get used to the bike before taking it to it’s limits. The sound and the character both change as the bike crosses the 6k rpm mark. The sound is so awesome that it will be music to your ears, trust me on that.

It’s very easy to get carried away by the acceleration within no time it’ll reach 0-100, and you may be fooled into believing that you are doing 100-110kmph when you actually may be doing 140kmph. It will easily do 180kmph on the speedo. The max that I’ve done is around 175Kmph. It is so smooth that you’ll fall into love just by the feel of the bike. It is clearly such a wonderful feeling that can’t be described in words. It goes like the wind, only louder. 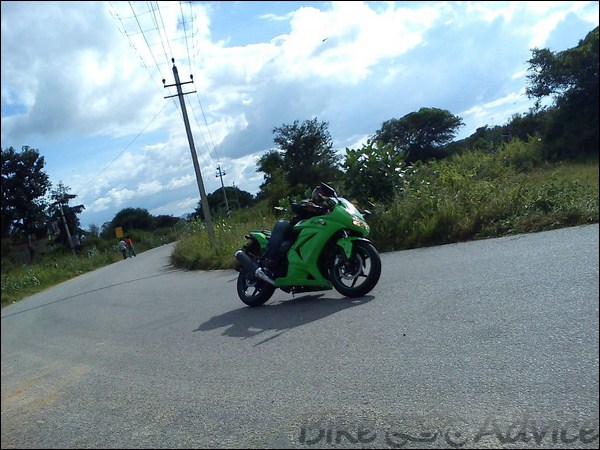 There is no hint of even slight vibration at any rpm. The supension what I felt was towards the softer side, however the rear suspension is 5-way adjustable. The bike weighs 172kgs once it starts moving you won’t feel the weight at all, at speeds below 20kmph, it may bother a bit but above that, no chance. It is very planted in the corners, and getting the knee down is as easy as cutting a cake. The confidence that it inspires is so much that it’ll put a smile on your face.

Talking of agility, it’s not as flickable as the R15 but then there is not so much of a difference and in the city traffic you can’t flick it like the R15 also having a 3.2L motorcycle deters you from doing that. Like I said cornering is a breeze on the bike and even when you overcooked a turn, you can correct it without panicking. You can clearly feel the connection of the rear wheel with the throttle coming out of a turn and in the power-band you may sometimes be rewarded with the power-slide. It’ll make you feel like Valentino Rossi.

The brakes on the Ninja are very sharp and you have to be very careful with the front. The front and rear are 290mm and 220mm twin piston calipers Nisin unit. The rotor is petal shaped giving it a snazzy look and also helping in effective heat dissipation. It is very very stable under harsh braking and all it takes is just a slight tap of the fingers to bring the bike to a halt. 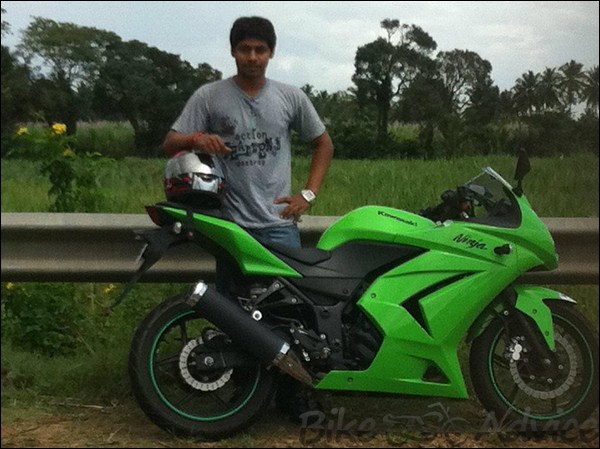 Even under heavy acceleration you won’t feel uneasy once you are familiar with the bike so stable the bike is. However I am smitten by the stability in the corners, trust me even in the bumpier corners the bike will not show signs of unstability under proper input. 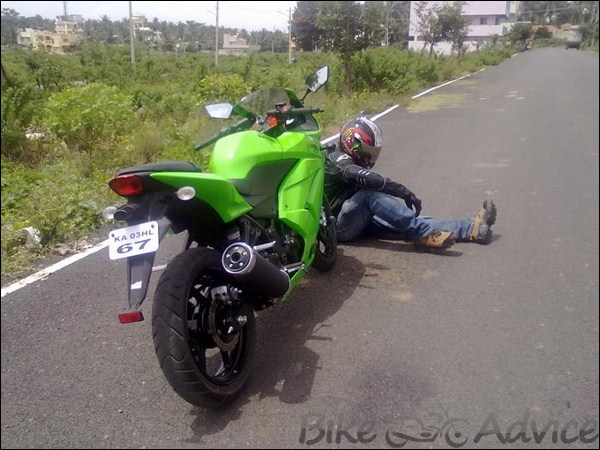 The 1st thing that you will notice once you jump on the bike is fit and finish, it’s so neat that you can’t find a single fault or any rough edge. It’s as is expected of an imported bike. The attention to detail is just flawless.

Mileage is not that big concern for me.Still the bike gives me 22-24kmpl considering the Bangalore traffic.

The probiking guys know how to treat their premium customers. They are ver co-operative and prompt in the service. 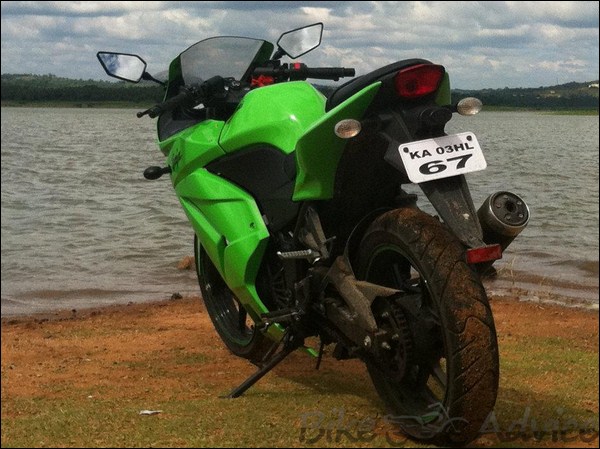 If you can spend 3.2L for a bike, buy it without any second thought as while you are riding it will make you forget everything. 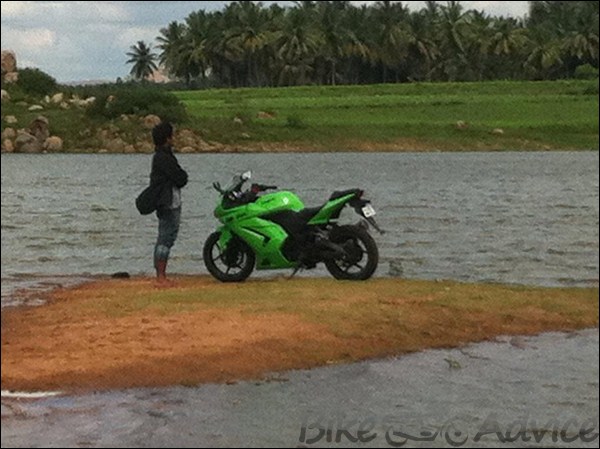 When I’m down, riding lifts up my spirit; when I cry, it consoles me; when I’m angry, it calms me down; when I’m happy; it makes me happier. As soon as I switch it on, it puts a smile on my face and makes me forget everything. It’ll always reamain the Ninja of my dreams. Thanks to my parents for buying me all the bikes and to almighty.

Finally for fellow riders- Always wear a helmet and ride no matter how small the distance or the ride is. Don’t indulge in street racing and ride defensively/responsibly. Always wear proper riding gear and ride. Ciao, Happy Riding, Hope I didn’t bore anyone!