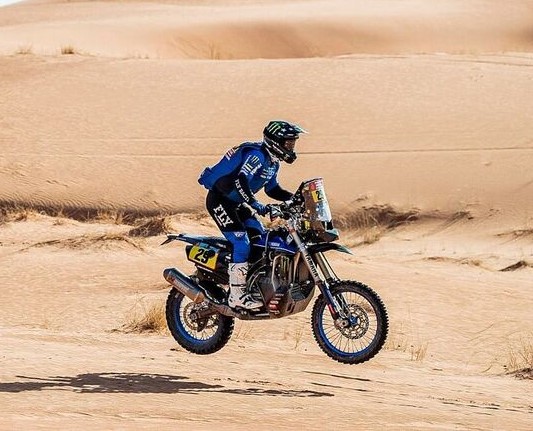 Yamaha exits Dakar and FIM Rally Series! Once the top contender in these championships, the team has found it tough to compete as successfully..

For us Indians, Yamaha is the manufacturer that allowed us to taste blood in the form of RD350! Some other trend setting machines from the company are the fully faired RX100 and R15. For some, Yamaha is related to the legacy of the legendary Valentino Rossi and their combined success and dominance in the world of MotoGP.

But do you know, Yamaha is the only manufacturer to take part in all the 43 events of the most grueling and treacherous proving ground in Rally racing – The Dakar Rally.

And not just participate, they held a winning record in the event too which established their grit in the rally world. In 1979, Cyril Neveu led the Yamaha XT 500 to the manufacturer’s first ever Paris-Dakar victory which the rider repeated the next year as well. Then ‘Team Blue’ returned to the top step in 1991 with their riders Stephane Peterhansel and Edie Orioli achieving six victories riding the YZE 750T and YZE 850T. However, Peterhansel’s 1998 Dakar victory was the last ever victory for the Yamaha Factory Rally Team.

Coming to the recent 2022 Dakar Rally, Yamaha Factory Rally Team did perform well with their rider, Adrien Van Beveren, showing a strong performance in 10 stages of the gruesome rally. However, due to a mistake in reading the map leading to navigational issues, the French rider gave up the chance for the team to dominate the championship, resulting in him finishing the Rally Dakar in fourth place.

Yamaha’s long struggle for results in the rally championships and the recent evolution and expansion of the off-road/ADV market have forced the Iwata factory to reconsider their priorities and it has decided to exit the rally world altogether.

“While the Dakar Rally has managed to stay close to its roots while leaving its spiritual homeland of Africa, the world around it has changed a lot,”

“Our off-road customers have different expectations and are looking for different products and we need to cater to that if we want to stay connected. For this reason, we have decided to end our long history on two wheels in the Dakar Rally and in the World Championship.”

What the rally championship world loses, the off-road/ADV world gains.

The Yamaha Tenere 700, which was launched in 2019 globally, is considered to be one of the best ADV bikes in the middleweight adventure category. It is their ADV machine directly inspired by their Dakar conquering machines and follows the same philosophy as well. It gets a minimal electronic suite with only switchable ABS on offer.

It became so famous and admired by riders that Yamaha has brought two variants of this model in the last two years, each more capable than the previous. In 2020, Yamaha launched the Tenere 700 Rally Edition with taller suspension and in 2022, the Tenere 700 World Raid with an even taller stance and dual-fuel tanks.

It is always sad and disheartening to see championships lose contenders. The changing world and lack of results have forced Yamaha to re-evaluate their priorities and take such a drastic measure. However, we do hope that Yamaha will once again make a comeback in the rally world and once again show us the grit and determination that once made them a formidable opponent.