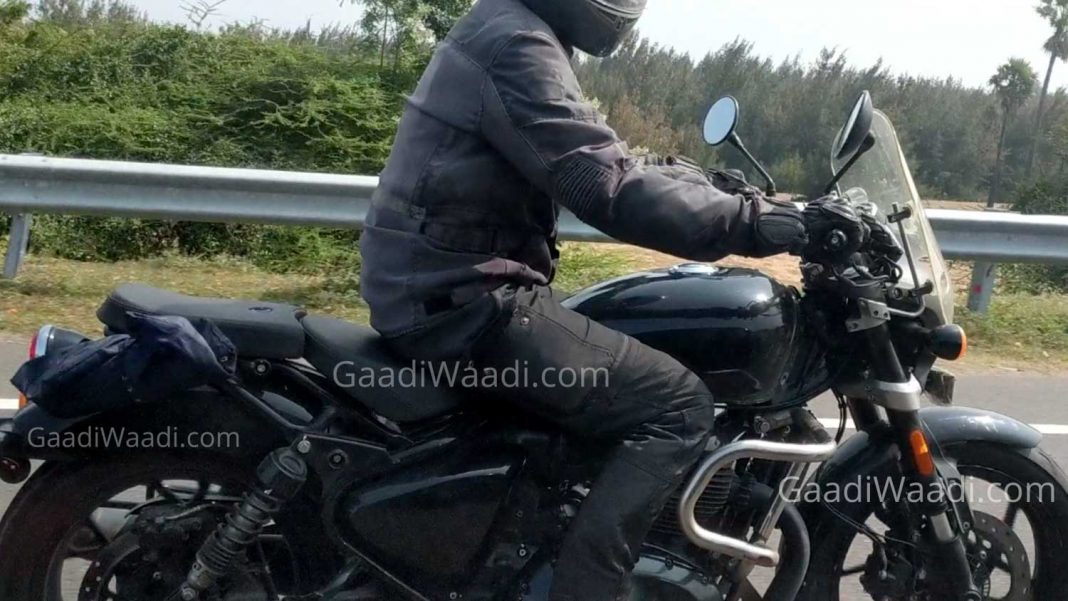 Upcoming RE 650 cruiser will, most certainly, be the costliest motorcycle in the company’s lineup. It looks really promising…

Though Royal Enfield is massive in the premium segment, it is striving extremely hard to not let the leadership slip, even by an inch. It holds an insane 95 percent market share in the 251cc to 500cc motorcycle segment (check numbers here). It is also doing extremely well in the 2-3 Lakh price bracket with its 650 twins.

As the next and obvious step, the company is working on the succeeding product on this twin engine platform. The 650cc cruiser, probably Royal Enfield’s most premium model, has been spotted testing once again and this time we have a pretty good clue of its styling and size.

The tall, lanky cruiser, gets a fairly large wind screen similar to the Meteor 350 and has roadster like ergonomics. The foot position is not stretched like a typical cruiser and the rider is also sitting at a slightly front leaning position.

The split seat is extremely long and should accommodate the pillion comfortably. The model is running on upside down front forks at the front and conventional dual shock absorbers at the rear. The round headlamp is complemented by circular rear view mirrors which, frankly, look dated.

Power would come from the extremely potent 650cc twin cylinder engine that does duty on the Interceptor and CGT 650s. Will it continue with the same power and torque outputs can not be ascertained at this point but it will definitely be tuned for relaxed riding considering the expected usage of this motorcycle.

We have no clue about its launch timeframe as of now but considering the aggression of Royal Enfield in testing this model on the roads, we may hear something about it officially sometime this year. Expect it to cost more than the existing 650s.