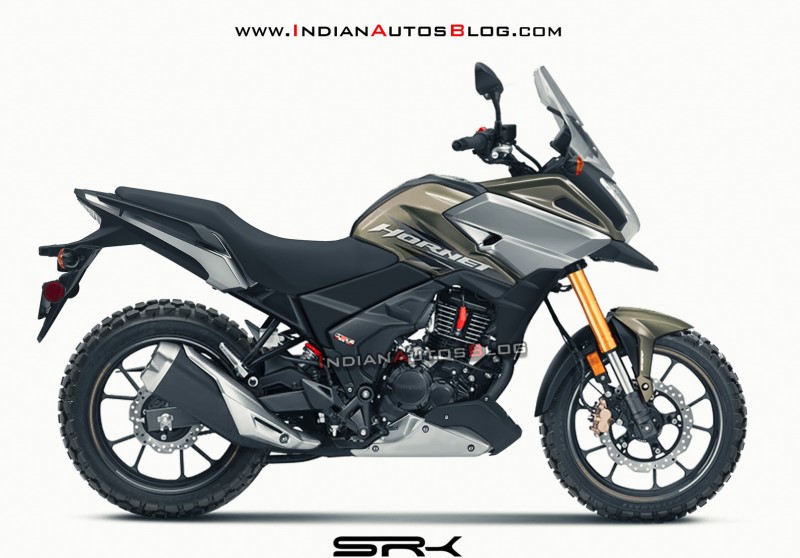 Couple of weeks back, Honda’s newly appointed CEO and MD confirmed that the company is working on more products on its new Hornet 180 platform. This will include an Adventure model as well (more details).

The Hornet 180 has opened to bumper response from bikers and in fact, it outsold the Pulsar 200s + Pulsar 180 in sales in its first full month of dispatches (check out the numbers). Following this revelation, a speculative rendering pic of what the Hornet Adventure may look like, has emerged.

The motorcycle in the pic has a half fairing bolted on a new body and accentuated by golden colored upside down front forks. Additionally, it also has a chunky underbelly engine cover along with a tall windscreen to prevent from wind blasts. The knobby tyres round up the motorcycle’s ‘Adventure’ capabilities.

The artist is inspired by the dual tone color shades of the streetfighter version and it carries a green and grey color theme.

It will be interesting to see if Honda actually goes for extra ‘flab’ by fitting that fairing like the CBF-190X or consider the relatively minimalist styling theme of its NXR Bros for this one. Chances of the Hornet Adventure being closer to the Chinese CBF are higher as it is the original platform for this model.

Power will continue from the same 185cc single cylinder engine which is capable of producing 17.3 PS of peak power and 16.1 Nm of max torque. This will give us a worthy rival against the entry level, and pretty popular, Hero Xpulse 200.