Update: The latest news (Oct.25) about the bike is posted here – Suzuki GS150R

The 150cc Segment is picking up in India. Suzuki has been a little conservative till now with its bike models. Zeus and Heat and not extra ordinary, but it sells enough to be seen here and there a while. The company took another step ahead with the Access 125 Scooter. But, as we know, Suzuki is a leader in automotive industry and the largest Indian car maker, Maruti, does have partnership with Suzuki.

Suzuki GSR 150 Lanza, a 150cc bike from Suzuki is sure to compete against Apache RTR, Unicorn, Hunk and Pulsar. While many expected that this bike will be like the R15, Suzuki has planned to play it safe initially. Here is a spy photo of the Suzuki Lanza. 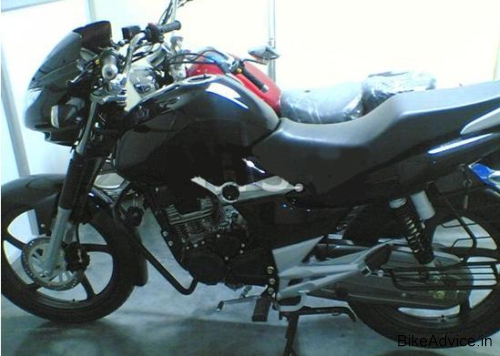 Some of the notable features of this bike are gas suspension, six speed transmission, LCD console and 15bhp of power.