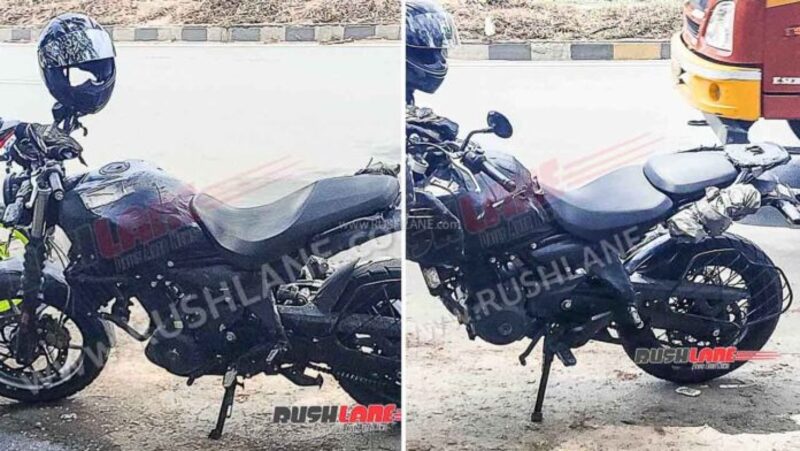 It’s another Monday, and that means we have some new images of Royal Enfield test–bikes to share with you.

So, there are still 7 months remaining in the year, and it appears to be a hectic one for Royal Enfield. It is expected that in the coming months we might get to see RE bring at least 3-4 new motorcycles.

The 650 platform will get two new models – Super Meteor 650 & Shotgun 650 – and the 350 platform is going to add the Hunter 350 into its line-up. And maybe, by God’s grace, we might get to see the unveiling of the highly anticipated Royal Enfield Himalayan 450 ADV bike, which is going to be a whole new motorcycle ground-up.

But wait!! Is Royal Enfield so far ahead in development that they are working on a Scrambler model based on Himalayan 450??

So, ever since the news has broken about the development of the next generation of Himalayan along with many spy-images that have emerged of the bike getting tested on our highways, the hype and excitement among the bikers is at an all-time high.

The various spy-images that have surfaced of the Himalayan 450 indicate that the bike is in an advanced state of testing & development. It has been caught speeding along on the highways just outside the city of Chennai. The test-bike was fully covered in black camouflage and the rider was trying his best not to give any passer-by a chance to capture the bike.

However, a new set of spy-images might be telling us that Royal Enfield is so far in development that they might be testing the Scrambler model based on the Himalayan 450 ADV.

Parked alongside the Himalayan 450 test-bike, we can see the image of a fully-camouflaged naked bike strapping block-pattern dual-purpose tyres and fork gaiters covering the front forks. This new bike could be the Scrambler bike based on the Himalayan 450.

But just for a moment, hear us out, does it really look like a scrambler??

Just for a second, forget what we have told you about this bike. Forget every detail about it and just look at it. Look at the big fuel tank that melds into the single-unit seat. Look at the raised tail section with minimal split-grab handles. What does it remind you of??

To us, from the angle the image has been captured, it looks like a smaller version of the ever-popular and much loved Suzuki SV650 naked bike. This new bike from RE showcases the classic lines of the old-school nakeds/roadsters and also indicates a probable shift in the design philosophy of RE moving forward.

Royal Enfield have always stayed true to their legacy & design philosophy of creating and maintaining the old-school aesthetics on their bikes. The Himalayan carries the old-school ADV vibes, while the Meteor 350, the Classic 350 etc. carry the look of the cruisers from yesteryear. The equipment and features also continue this philosophy, with bikes featuring only the necessary tech, keeping everything else traditional.

This new Scram 450 carries forward the design philosophy and sports the classic roadster aesthetics. Single round headlight, fork-gaiters, clipped fender at the rear, compact chassis, minimal design, shorter straight handle-bars all are reminiscent of how we remember the old roadster bikes.

So, do these new 450 bikes suggest evolution of Royal Enfield design philosophy?? Will the new bikes from their stables carry more modern aesthetics melded with retro elements??

Stay tuned… While we hunt for answers…