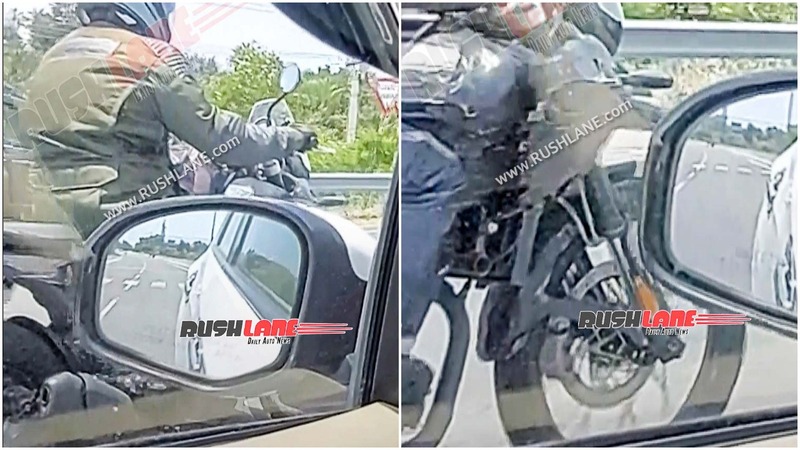 So, it must be Monday again, because we have some new images of Royal Enfield testing their Himalayan 450 on our roads. These new images are of the right profile of the test-bike and provides us with a clearer look of the instrumentation and exhaust-unit of the upcoming ADV.

The new spy-images show a very similar test-bike of the Himalayan 450 which was spotted last week zipping along the highway. The test-bike is heavily camouflaged so it is very difficult to understand the finer details of the styling and the design of the bike.

But overall, we can make out some of the broader design choices that can make it to the final production model. Moving from the front to back of the ADV, we can see the staple ADV design of the modern ADVs being melded into the traditional Himalayan look to bring the new model into the present.

The front showcases the use of a beak fender mounted high-up paired with a tyre-hugging fender. The front 21” wheel is suspended on new Upside-Down (USD) shocks which points to better handling characteristics of the new ADV.

Moving along, we can see a large round fuel-tank enveloped in what appears to be a small fairing to divert the wind away from the legs and hips of the rider. The handlebar is high-mounted which will allow better control to the rider while both sitting as well as standing on the bike.

The newest detail we can see this time is the exhaust muffler of the upcoming Himalayan 450. We know the new ADV will be using a brand new engine which will be a single-cylinder unit. What is surprising is the use of an upswept flat and stubby exhaust muffler which is barely long enough to reach the rear wheel of the bike. Our best guess is that this might be a test-muffler just like the bike itself is. If this stubby unit does make its way into production, it will be the first time RE will not be using a long-tube shaped exhaust unit on their bike.

To refresh your memory, the biggest mystery on the new Himalayan 450 is the engine. It is heavily rumoured that the new ADV will be using a brand new 450 cc single-cylinder engine which has been developed from scratch. It is expected that the new engine will put out 40 HP of power and 45 Nm of torque and will be paired with a 6-speed transmission system.

Nothing has been confirmed by Royal Enfield on the upcoming Himalayan 450, as of now. The whispers say we can see the new Himalayan 450 launch somewhere in early 2023.

We have our senses on high alert regarding any new development on the upcoming ADV… Stay Tuned….