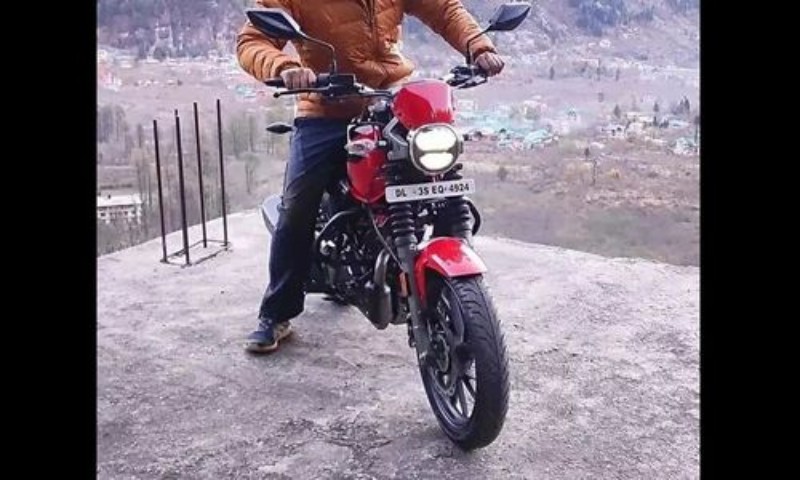 2023 Xpulse 200T launch would bring back the second Xpulse motorcycle in the portfolio. The T is promoted as a tourer...

So, Hero MotoCorp is trying all it can to make a mark in the premium motorcycle segment. And its focus point is the 200cc platform – specially the Xpulse brand that has, sort of, gotten some traction with the ADV being considered with high regards.

They have been busy with launching Rally Kit for Xpulse 200 4V ADV, announcing the limited run Xpulse 200 4V Rally Edition and unveiling the XTEC variants of their Passion Pro & Splendor+ models. Yesterday, they introduced an all-Black edition of their Super Splendor 125 which was called as Super Splendor Canvas Black Edition.

But that’s not all – we have a new image to share with you which shows that the next update rolling out could be their road-focused Xpulse 200T.

The spied image shows that the new 200T, which is promoted as a tourer, has received a fresher look with some interesting design tweaks. The position of the headlight unit has been moved slightly lower than the previous model, and the space above has been taken up by a small visor which is painted in the same colour as the bike. It could mean that the visor will be a standard accessory with the bike and will match the overall paint scheme.

Also read: Royal Enfield Hunter 350 Could Arrive On August 7; Might Come In 2 Variants

Two more new elements we can see on the new bike are the use of fork boots/gaiters and a colour-matched cylinder head.

Just like we saw on the new limited run Xpulse 200 4V Rally Edition, the new Xpulse 200T bike also sports a Red-coloured cylinder head. Will it be coloured-matched to the paint scheme of the bike, that has to be seen. This also points to the fact that the new naked could be fitted with the more powerful and efficient 4-valve engine that does duty on the new Xpulse 200 4V ADV.

The current Xpulse 200T is offered at Rs. 1.24 Lakh (ex-showroom). So, if it does get the new 4-valve engine, expect the pricing to be bumped a little. The new Xpulse 200T will definitely make its debut really soon.