If you are a regular here, this should not come as a surprise to you. Barely a few days back, on 21st January to be precise, BikeAdvice exclusively informed its readers last month about the spotting of RC390 (or RC200) fully-faired bike by one of our reader near Bajaj’s facility in Pune (Check here). 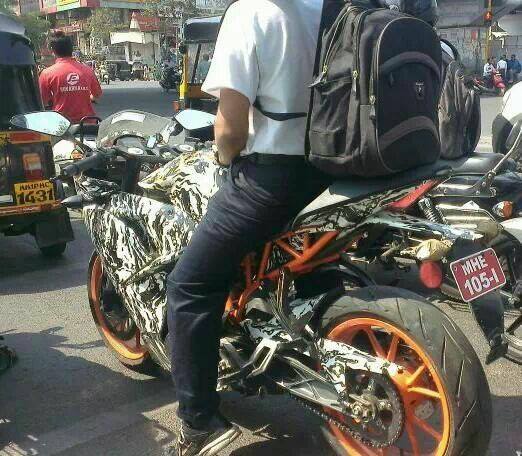 Now, a new image has popped up on Facebook showing a KTM, which appears to be the RC390. The bike in the picture is wearing black-and-white camo paint and is on the public road undergoing pre-launch tests. The only giveaway that this could be the RC390 (and not the RC200) are the Metzeler tyres. Since the Duke 390, on which the RC390 is based, sports Metzelers, its obvious to expect that the RC390 will also come equipped with them. On the other hand, Duke 200 comes equipped with MRF’s and unless KTM wants to Metzeler-ize it, we see the RC200 also getting the same.

The KTM website has already been showing the RC200 and the RC390 as “coming soon to India“. The photographs on the website also show that the engine capacity of each RC is etched on the forward fairing of all the bikes. Since this test mule was not wearing the production colors or graphics, it is difficult to deduce the cubic capacity accurately.

Be it RC 200 or RC 390, the sighting is a sureshot surefire sign of KTM’s intention of bringing the bikes soon at their dealerships. It is quite possible that the KTM stall at Pragati Maidan will witness quite a few interesting announcements regarding the launch of the new bikes from the company. KTM has been real good at sticking price tags to their different products in India and one could hope that the new RC version of the fabled Duke 200 and Duke 390 will have price tags friendly enough for most of us to approach the bikes without first robbing the neighbourhood bank.

Unlike the Honda CBR250R and the Kawasaki Ninja 300, the KTM RCs are not designed to please most of us. These machines from KTM have a more committed seating and handlebar placement, which should be a more thorough experience of the MotoGP machines on the one hand while giving your back and wrists an ache or two after an extended ride. I, personally, would like KTM to come as close as possible to the MotoGP ride geometry.

According to the unconfirmed bit we have, KTM RC200 may be priced at Rs 1.60-1.65 Lakhs ex-showroom and the RC390 may extend all the way upto Rs 2.5 Lakhs ex-showroom. Subsequently, Duke 390 will also be made dearer in smaller price revisions here and there.