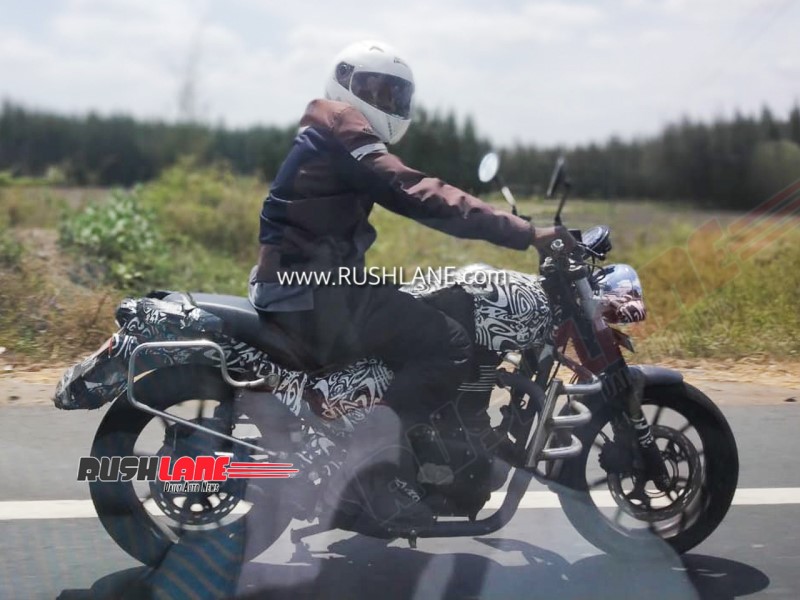 Royal Enfield has plans to get extremely aggressive with new product launches. Barely has the new Meteor 350 been uncovered, we have spy pics of a new model being tested by the company. This is probably the next all-new motorcycle launch the company may be preparing for our market.

There are four names that Royal Enfield has trademarked recently – Sherpa, Flying Flea, Hunter and Meteor according to the information in public domain. Meteor has already gone to the Thunderbird replacement (check Meteor’s spy pics & details). This roadster designed cruiser with a relatively low-lying appearance could get one of the remaining names – probably ‘Hunter’, as Flying Flea should be something extremely light (based on its history) and Sherpa name may go a basic, utility, do-it-all kind of a rugged motorcycle.

This test mule appears to be running the same engine as the now-known Meteor from outer appearance. Which means that Hunter may also be a 350 cc motorcycle with a wee bit of modern touch. These test mules are running 10-spoke alloy wheels with what appear to be 17 or 18 inch fatter tyres. The upswept exhaust is very unlike Royal Enfield and we can also notice that LED tail lamp which appears to be a part of the body rather than a separate add-on part like on the current REs.

The test rider appears to be short in height and the ergonomics/seating posture appear to be nice and straight. A single pod instrument cluster may be carrying few needles along with some digital read-outs. The headlamp is chrome dipped and doesn’t go well with the overall black theme of the alloys, engine and other parts.

Considering that Meteor would be the brand that Royal Enfield will want to focus on this year, this upcoming (if) Hunter could be a next year launch candidate…