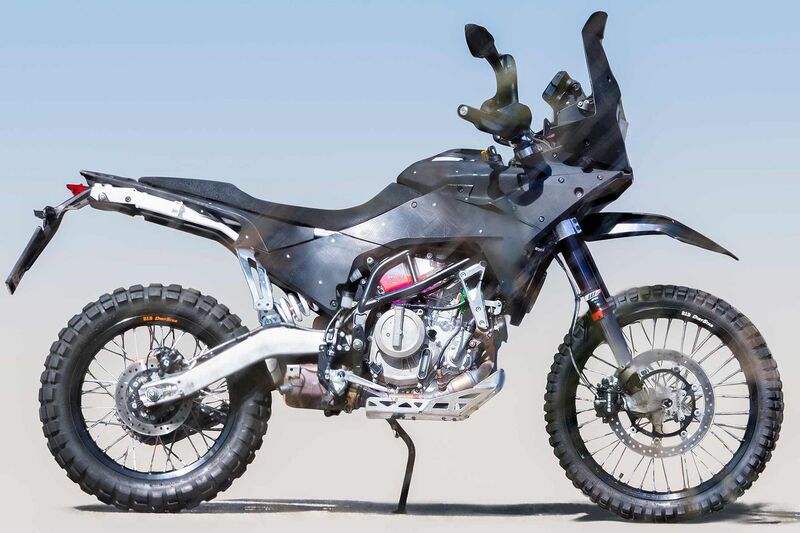 KTM 390 Rally test-bike has been spotted on testing in Austria… Can this be a rally model for KTM’s sister brand GasGas???

While we are waiting for next-gen 390 Duke along with rest of the Duke family to make their debut, KTM is already working on a more hardcore off-roader machine based on the 390 platform.

Thanks to an international portal, we have, in our hands, an image of a 390 single-cylinder engine based test-bike sporting tall & stacked headlights just like their bigger Rally conquering models.

But boy!! The new test-bike captured looks even more aggressive and appears to be getting ready to tackle Rally Raids. The test-bike’s styling and design appears to be heavily inspired from KTM’s ‘450 Rally Factory Replica’ bike showcased a few months ago.

One look at the test-bike and features like tall & stacked headlights, greater front rake angle and chunky suspension components are unmissable. The test-bike appears to be sporting a new frame design and a new engine, very similar to the design also spotted on the next-gen 390 Duke coming soon.

The new Tubular-Steel trellis frame is coupled with a newly designed ‘Banana’ swingarm which is more curved than the swingarm spotted on road-focussed next-gen 390 Duke test-bikes. According to some sources, this new banana shaped swingarm is used to increase the ground clearance of the rear of the bike.

The suspension setup appears to be more robust and premium, indicating hardcore off-road tackling capabilities. The test-bike is sporting a side-mounted monoshock setup at the rear, again similar to the arrangement seen on the next-gen Duke test-bikes.

However, the question is this – Under which brand will this hardcore off-roader launch??

So, there is a huge probability that this bike might don the symbolic Red colour of the GasGas brand and be offered as their next single-cylinder 450-platform consumer offering.

Or, and we have our fingers crossed for this, this might be the KTM’s new hardcore ‘390 Rally’ model for the masses, inspired from the likes of Yamaha Tenere 700 World Raid and Ducati DesertX.

Stay tuned for all the new updates…
Source – Cycle World