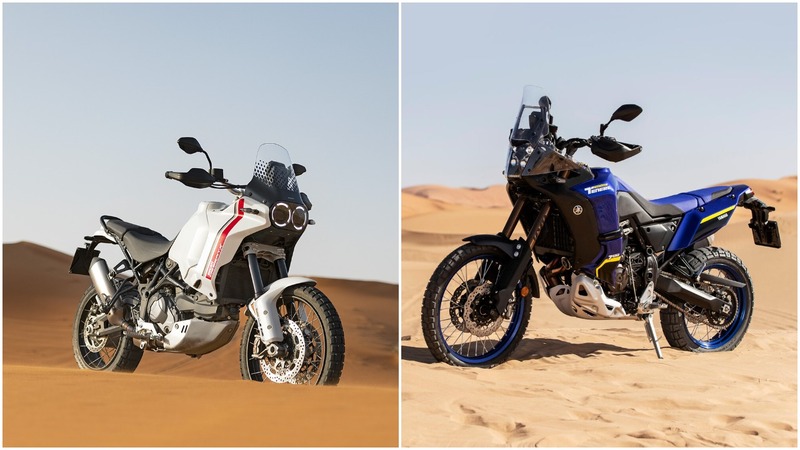 Today’s Head-to-Head is an exciting one. We are putting two of the latest, most capable and directly competing Desert-sled ADVs from Ducati and Yamaha stables against each other.

Let’s have a look how the Ducati DesertX and Yamaha Tenere 700 World Raid fare against each other :

There is an obvious difference in the performance figures of both the ADVs as the power-unit of the Ducati is much closer to the liter class as compared to the T7 engine which is a middleweight spec engine.

Hence, the performance figures of the DesertX is significantly higher than the T7 World Raid. But one criteria where the T7 beats the DesertX is the fuel capacity. The T7 gets 23 L as standard with dual-fuel tanks as standard while the DesertX’s capacity could be increased by adding the 8 L optional auxiliary tanks.

Also read: Yezdi Adventure vs Scrambler – What Are the Differences…?

Both the bikes are carrying fundamentally different frames. Other than this, almost every other component of the chassis is similar in both the ADVs.

Only criteria where the DesertX is faring better than the T7 is the rear suspension setup. While the Ducati is using the KYB monoshock in the rear, Yamaha has not mentioned the maker of rear suspension other than mentioning the type.

So, the point goes to Ducati in this aspect.

While the DesertX is longer and shorter seat height, the T7 is shorter with taller seat height. Hence, their riding characteristics will be different from each other.

The T7 World Raid is lighter than the DesertX when full of fuel and oils but just by 3 kg.

Also read: Indian CB300R BSVI vs Euro5 – How Different Are They??

Braking hardware of the DesertX is superior with larger rotors at the front and the rear assisted by Brembo calipers. This will definitely provide better braking performance and better control for the rider in all conditions.

The wheels and tyre profiles are similar in both the competitors.

Tech-wise, the Ducati DesertX is the clear winner. The Ducati is loaded with all the bells and whistles they have on offer. From TFT screen loaded with Bluetooth functionality & smartphone connectivity to switchable ABS, riding & power modes and turn-by-turn navigation the Ducati has it all.

On the other hand, Yamaha explains that the Tenere 700 World Raidis built to be a pure Raid machine and hence, doesn’t get any electronic aids. Not even turn-by-turn navigation. It is a pure wilderness-attacking machine.

Two very similar machines, created to tackle harshest of conditions, on paper are different from each other in very limited aspects.

While the Ducati DesertX is loaded to the brim with the best of tech Ducati have on offer, the Yamaha have created a purist machine which only utilises the engineering and physics to take on the challenges our planet has to offer.

Some numbers or big technical names are not going to decide here which machine is better. What will decide is the rider and his approach to how he/she will tackle the wild.

For someone who needs a little help to keep their ADV in check, he/she will definitely go for the DesertX. While the purist at heart will opt for the T7 World Raid and will let the bike and his/her skills do the talking.

What excites us the most is, with introduction of these hardcore machines, the ADV world is changed forever. No longer an ADV is a tourer-first machine which can handle the off-road a little.

Now ADVs will be created from scratch which will be boulder-shattering, river-wading machines first, and highway-munchers second.