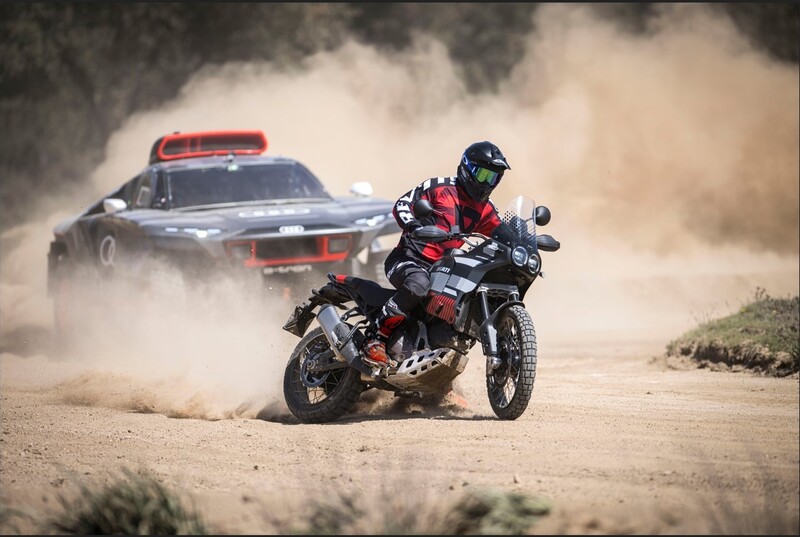 Ducati DesertX India launch confirmed for H2 2022 again. It has been showcased at the hills of Sardinia… Audi also made an appearance with their own machine…

So, sister companies Ducati and Audi (both owned by Volkswagen Group) have come together in the picturesque hills of Sardinia, Italy, to showcase their respective DesertX motorcycle and RSQ e-tron rally prototype. This special event saw big names of the rally world showcasing the extraordinary capabilities of these two machines.

At the special event organised by the partnership of Ducati and Audi, the Ducati DesertX and Audi RSQ e-tron rally machines took to the dry and sandy terrain of the region to showcase the capabilities of both these machines.

The 2022 Ducati DesertX was wrangled and rode by Danilo Petrucci who is an official Ducati rider and a stage-winner of the 2022 Dakar rally. He showcased the agility and capabilities of the ADV machine by taking on the harsh and unforgiving terrain of the region.

Let’s talk about the ADV a little.

The Ducati DesertX is one of the two most anticipated Adventure-tourer machines (other being the Yamaha Tenere 700 World Raid) to make its debut in the global as well as the Indian market. This is the first time that the Italian manufacturer has created a dedicated off-road centric motorcycle that features a 21” front and 18” rear tyre.

The DesertX has borrowed the Multistrada V2’s motor which also powers the Monster, Supersport and the Hypermotard. The engine is a 937 cc, liquid-cooled, Testastretta 11° Desmodromic valve-train putting out 110 BHP at 9250 RPM and 92 Nm of torque at 6500 RPM. The ADV is equipped with long-travel suspension setup and is aided by a suit of Ducati electronics which the company claims makes it one of the most capable machines on the planet.

Lastly, Ducati have confirmed it earlier and have said it again that the DesertX will make its way to India this year. The Italian ADV will be launched in our country in the second half of 2022.