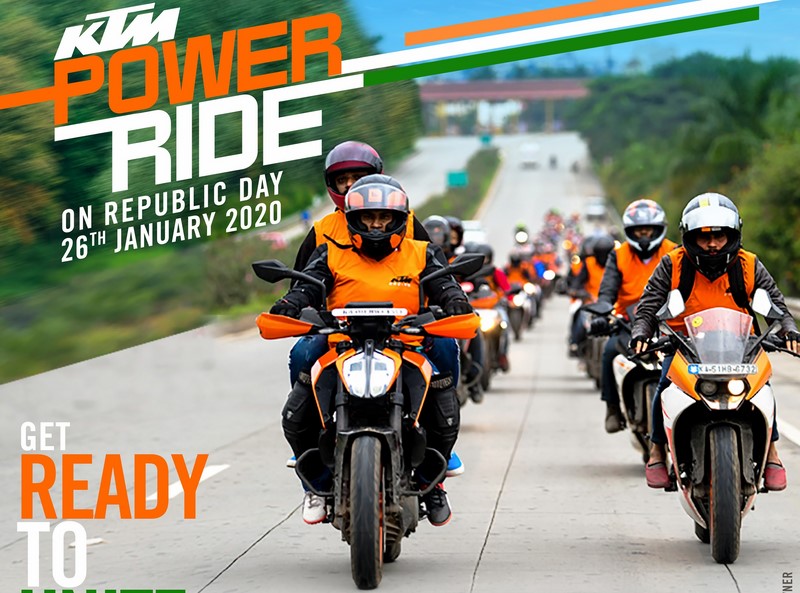 390 Adventure test rides are also being made available in some cities during this event. We share the details of the second Power Ride…

Like some other motorcycle companies, KTM has also ventured in pan-India rides on specific occasions. Called as the Power Ride, KTM conducted it for the first time on the 15th August 2019 and it has just announced its second power ride – which will be held on Sunday, 26th January 2020.

KTM will conduct breakfast rides in over 100 cities across India where KTM riders can join and ride and celebrate the Republic Day. These Power Rides will commence at 7 am at key dealerships in these cities. Riders can celebrate the occasion with the hoisting of the National flag.

KTM is also conducting KTM Power Pic contest where it will reward few bikers who post impressive pics of the ride on social media.

Moreover, riders can also witness the launch of the 390 Adventure in Mumbai, Pune, Delhi, NCR, Bengaluru and Hyderabad. Bikers willing to get the feel of adventure will also be allowed test rides of the baby ADV.

Over the years, KTM India has built a strong community consisting of thousands of KTM owners and thus, KTM Power ride is an apt platform for the community to come together. We had a great response to the inaugural KTM Power Ride during Independence Day 2019 and expect the ride during this Republic Day to be even better.

KTM owners can register their nomination at the nearest KTM showrooms. For more details of the event you can visit this official website.