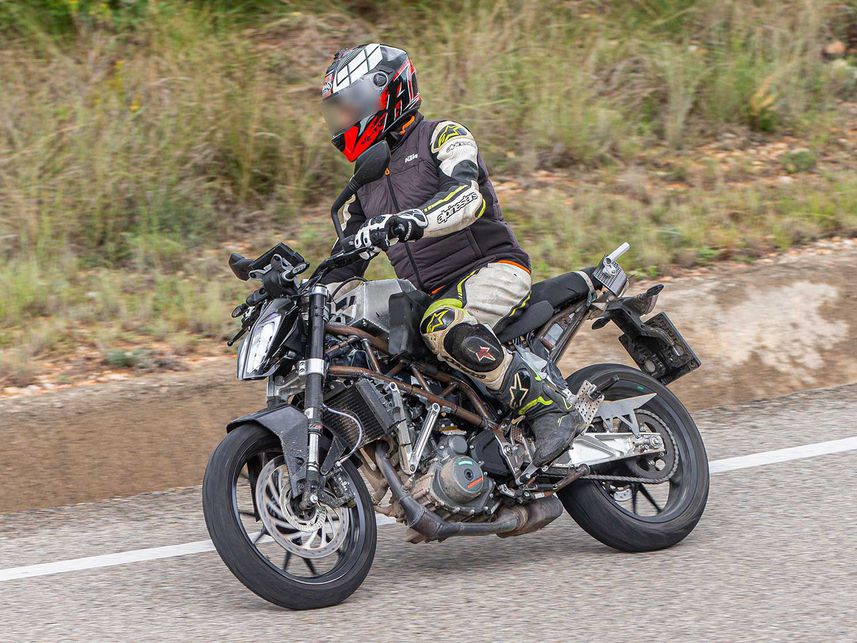 390 Duke spy pics suggest that the model is still far from production. It carries major changes and will be a new-generation model…

We already know that KTM is testing its new generation 390 Duke on the roads. The first test mule was spotted in April 2019 and the naked speedster is set to get major changes. In a latest update, pic of a test rider testing the upcoming machine absolutely barebones has surfaced.

The spyshot reveals the new Trellis frame of the motorcycle where the pipes are more evenly spaced out. It also gets a beefier looking swingarm and probably altered rear suspension. The exhaust is also changed – it runs under the engine on this mule whereas on the current 390 Duke, it runs by the side of the engine. Also, that fuel tank looks slightly bigger in capacity.

The rear fender carries what looks like the tail lamp and the number plate housing is also different.

So We Are NOT Getting the New-Gen KTM RC390?

There would be changes to the engine for sure apart from the Bharat Stage VI compliance for India (and Euro 5 for Europe). The 390 Adventure, which will be launched in India soon, features an updated version of this motor and the good news is that it continues with the same specs of 43.5 PS of peak power and 37 Nm of max torque.

This 390 Duke doesn’t appear to have gained a lot of near-production parts. We already understand that the BS6 390 Duke for India will continue to be in the current form. And this new-generation model may only be showcase ready at this year’s EICMA which means a launch in 2021 could be the earliest expectation.