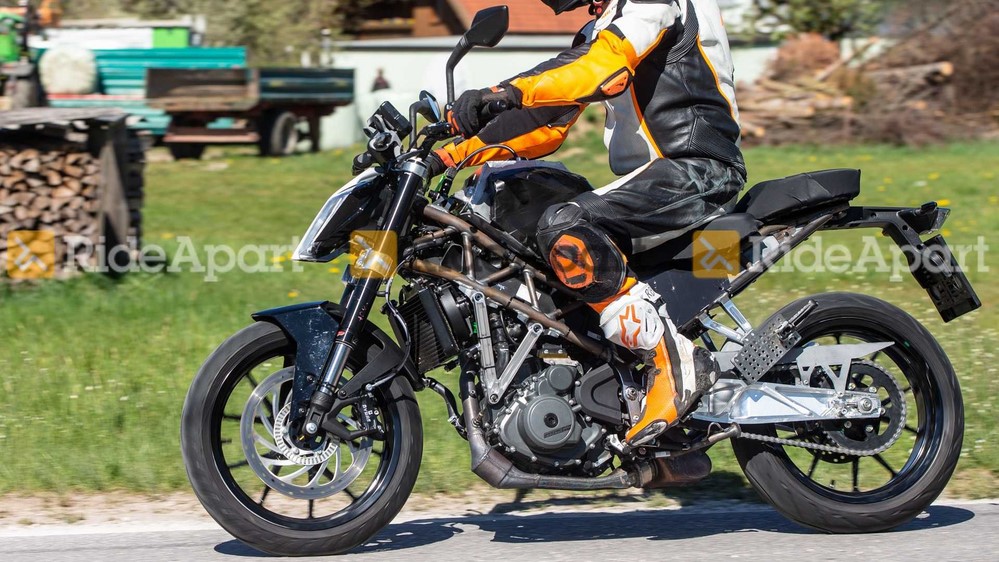 In a surprise development, 2021 Duke 390 spy pics have surfaced suggesting big improvements to the naked sportster…

Now, this is something we did not expect this soon! KTM is testing its new-generation Duke 390 out in the open and an international portal Rideapart has shared the very first spy pics.

As a first, you would certainly notice the new Trellis frame where the pipes are more evenly spaced. It is evidently longer as well which may mean that the new motorcycle may be slightly bigger in size. The aluminium swingarm also looks chunkier and reinforced differently from the current generation model.

Considering that stricter emission norms are kicking in, there will be changes to the exhaust as well. The exhaust pipe now runs under the engine (on the current model it runs by the side of the cylinder) ending up in what looks like a similar upswept canister. However, this may eat up a wee bit of ground clearance.

Rideapart also specifies that there will be changes to the engine in the form of a modified cylinder head. What will be the results of it in terms of outright power and torque specs can not be predicted at this point of time. Duke 390 has been a pinnacle in the entry level single cylinder sports motorcycles. The power output has remained consistent at around 43.5 PS whereas the second generation model gained 2 Nm of torque (it churns 37 Nm now).

For sure there will be changes to the already brilliant looking outer design as well. But this appears to be an early prototype and bodywork related additions will be fixed at a later stage. According to the source, this third-gen Duke 390 is scheduled for launch in 2021.

Not very long ago the new-generation RC390 was also spied (spy pics here) and we believe it will be an early launch candidate as it has remained very similar all through these years. Here in India however, we are waiting for the 390 Adventure for now which is definitely coming in few months. Check spy pics.