While 2014 Auto Expo was a pure show of unrealistic concepts, 2016 exhibits were more sensible from Hero. Not much has made it to the ground is another story though! If we have to pick the most interesting motorcycle from 2016 Auto Show from India’s largest brand, it is definitely the XF3R.

Hero unveiled it as a concept motorcycle and it carried some real interesting features like single-sided swingarm (a first from an Indian motorcycle maker), an abruptly placed exhaust canister (check how it looks without it), exposed frame, muscular naked styling etc and a near 300 cc motor!

But then, by now we already know that Hero and premium ‘interesting’ motorcycles do not go hand in hand – a feeling which has grown manifolds when the company revealed that the long awaited ‘HX250R’ project has been shelved (and the reason was hilarious). 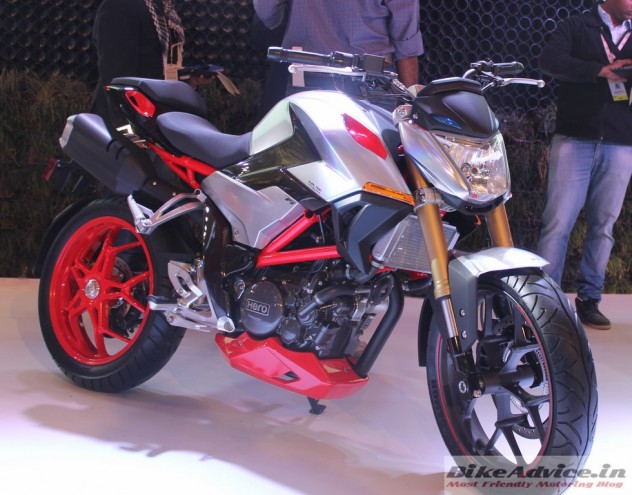 An older update at Autocar Pro predicted that Hero is working on a 300 cc motorcycle which is based on the XF3R concept. A latest report at Livemint builds up on this by claiming that Hero has plans to launch four 200-300cc motorcycles in the coming 18 months – which means we are talking about the next financial year (till March 2020).

Out of these four, Xtreme 200R and Xpulse are known. Retail sales of Xtreme 200R will commence soon (across the country) whereas XPulse is an end-FY2018-19 launch candidate (details).

Then that leaves us with the XF3R as one of the remaining two bigger capacity motorcycles. Read more details about XF3R concept here.

For some reason Hero re-launches Karizma as it is!

But considering how slow and unconfident Hero has been with these bigger capacity motorcycles, it will be a near-miracle if they actually end up introducing a bigger-than-200cc engine this soon. Let us see how it goes but a naked 300 with a slightly more aggressive front will be an interesting prospect…